So today I have a fun one for you. I’m sure you’ve seen all the flair and bling on handbags and backpacks this season. Pom and tassels are all the rage. I think there’s quite a bit of South American influence in the style trends this season and I’m loving it. Bright colors and tassels and fringe; that’s pretty much how I live my life. So I’ve been sitting on the materials for this project for about a month, and I finally managed to get it done. That kinda makes it sound hard, but really it only took me one day.

One of my big influences in this project was my Nena & Co handbags. They’re handcrafted bags that are ethically sourced from Guatemala. The fabric is handwoven and pieced from huipiles, basically their traditional handwoven shirts. The bags are all one-of-a-kind and bright and colorful. They’re basically the best, and I feel like I just rave about my bags to anyone that will listen. My husband does a fair amount of eye-rolling. Anyway, I bought my first bag a few months ago, and I could not find an accessory that I liked to match. Nena & Co actually sells pom tassels, but they sell out fast and colors are limited. So I decided to make one! Then fast forward a couple months of procrastination…I made one! Actually I made three! And I’ll show you how because it’s super easy and kinda fun. That is if you don’t have a two-year-old trying to steal your scissors and a 4-month-old demanding milk.

The first style I’ll show you is probably the most complex. We’ll get the hard stuff out of the way first, and then the rest will be a breeze. So first up in the Pom with a tassel. 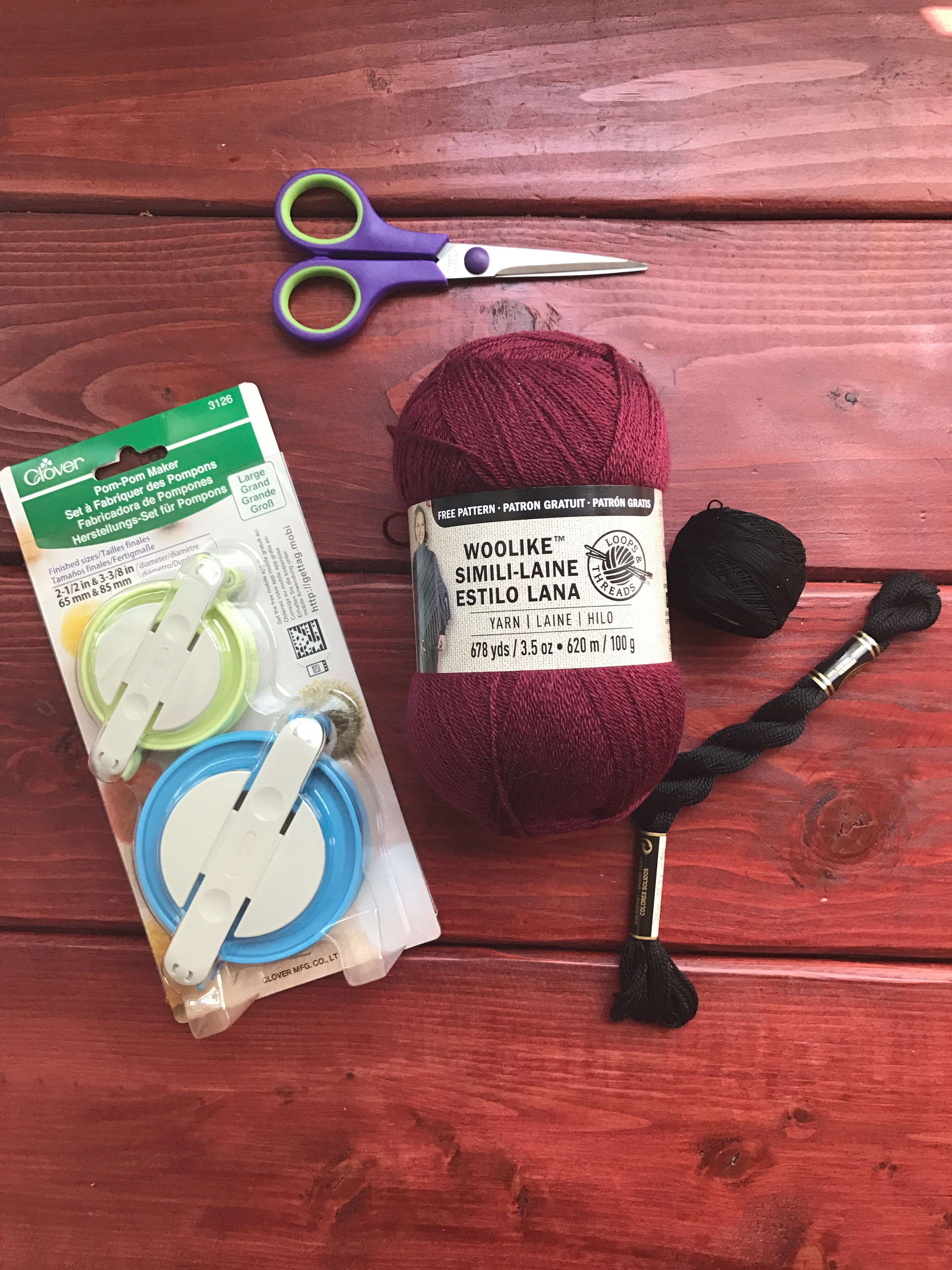 So I found this yarn at Michael’s for $2.99 per skein. Its pretty soft and very affordable, so it’s perfect for a pom. The spools of embroidery floss were $2.79 a piece, and even though i used 3 spools for mine, I think 2 would be sufficient. I got a extra skein of nicer embroidery floss to make the cord, but you could easily just use a bit from the spools. If for some reason you can’t find the spools, you can definitely use the skeins, but 1 spool = 10 skeins.

So as much as I’m sure you’re ready to make a pom, you actually want to make the cord and tassel first (you’ll see why later). You could be fancy and buy a tassel maker. Clover makes a good one. But I am not fancy, and I just use a DVD case.

Start with taping a 12 in piece of thread across the spine of the case.

Then start winding thread around the center of the case. You might as well go ahead and put that DVD in the player before you start because the winding process is pretty mindless. And yes, I love The Lorax, probably more than my two-year-old does. While you’re winding try to stay within about a 2-3 inch space and do your best to wind even layers.

After you’ve wound all you can wind, unstick your top piece of string and tie a loose knot. 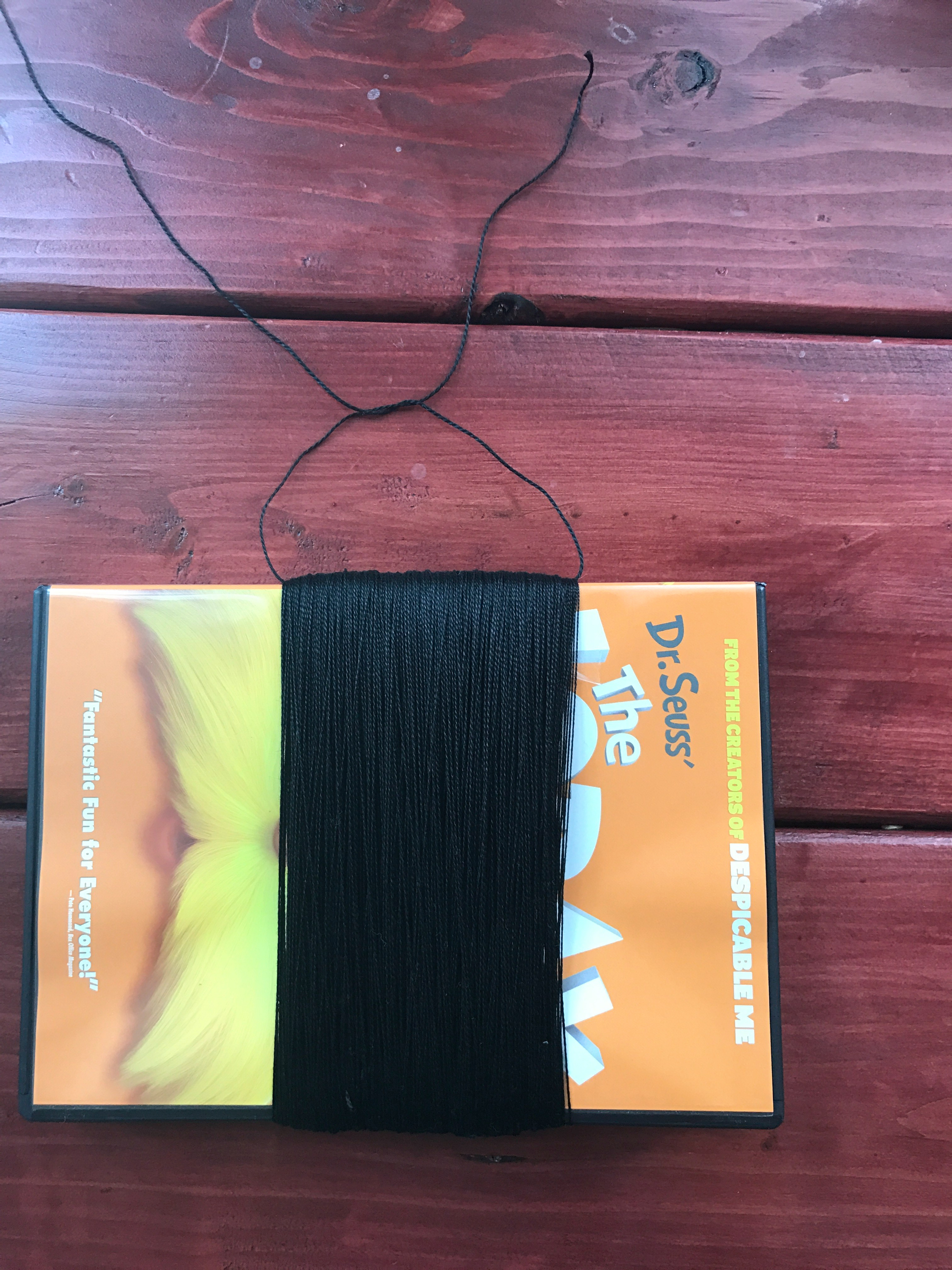 Now get your very sharp scissors and snip the bottom. The DVD case has the perfect little space for your scissors to go in. If you have a box cutter, you could use that instead. 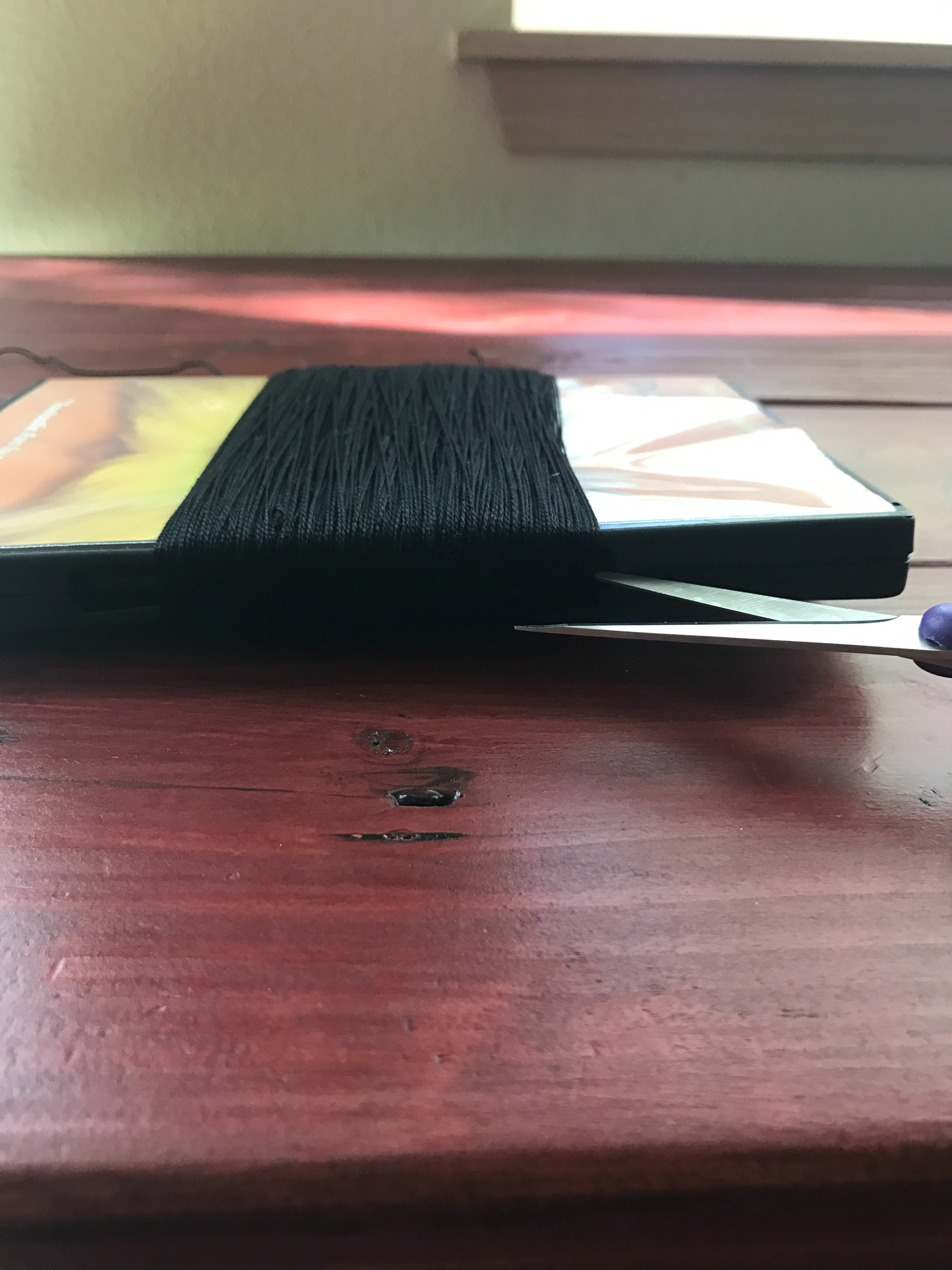 Your tassel is almost done! Now you just need to tighten that top knot and tie a short piece of string around the whole thing about an inch and a half down from the top string. I don’t know what the official name of this part is, but I have heard it called a “nub”. 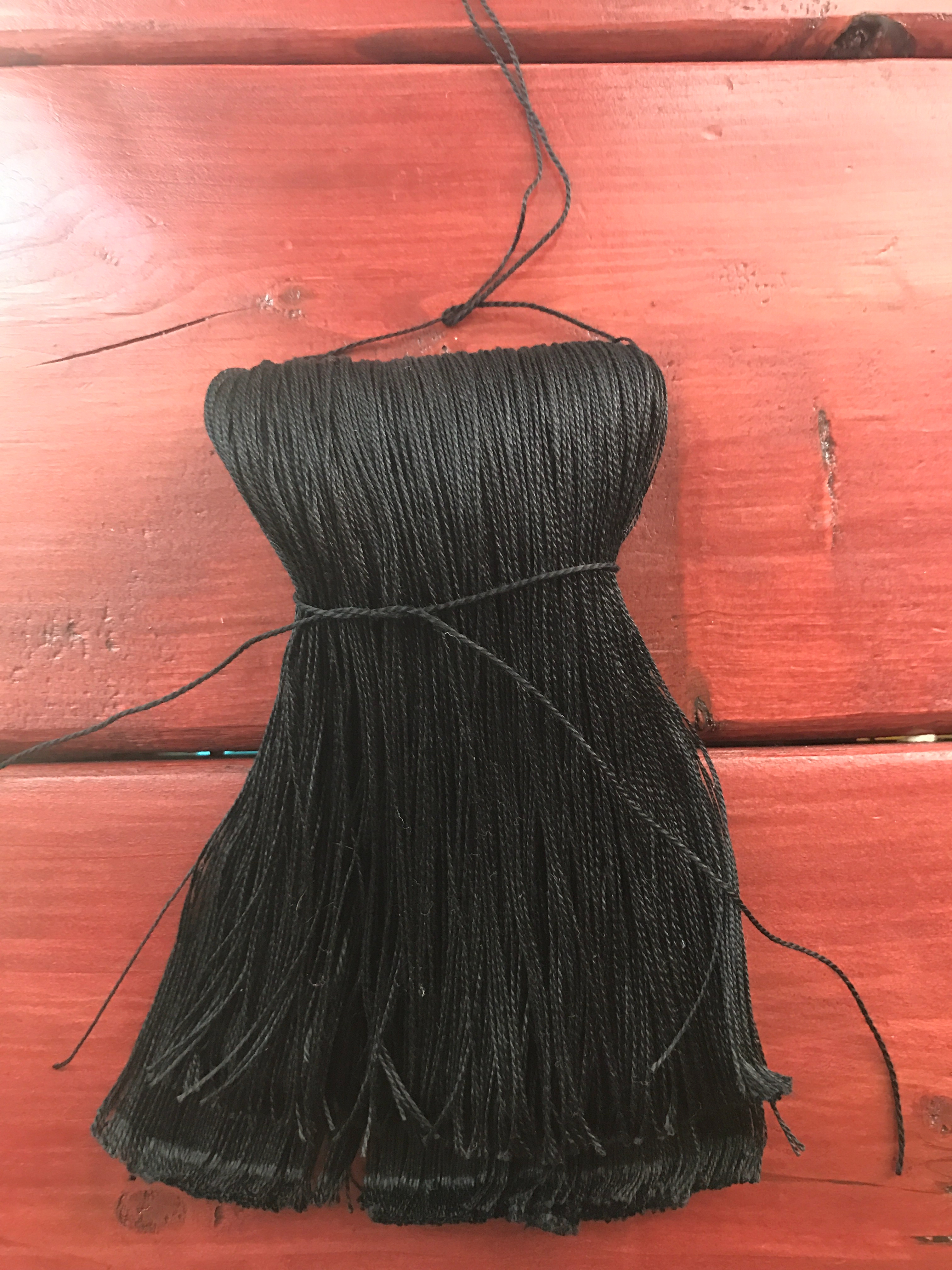 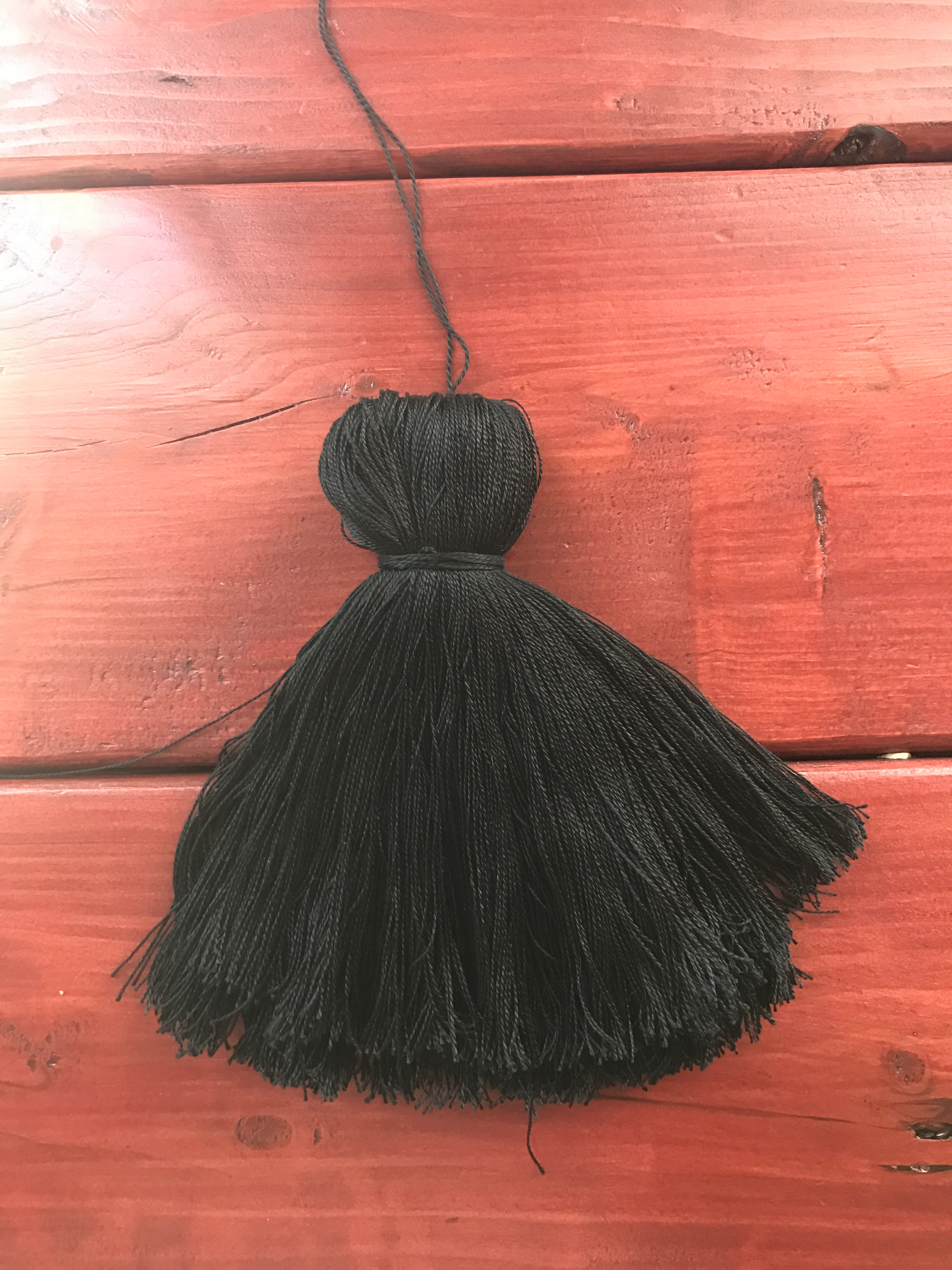 Ok tassel done! I like to give it a little trim and take a fine tooth comb and smooth it out, but thats totally optional.

Next the cord. Depending on how thick you want it, you’ll need about 6 pieces of thread approximately 24 inches long. Just loosely twist them together and set them aside. 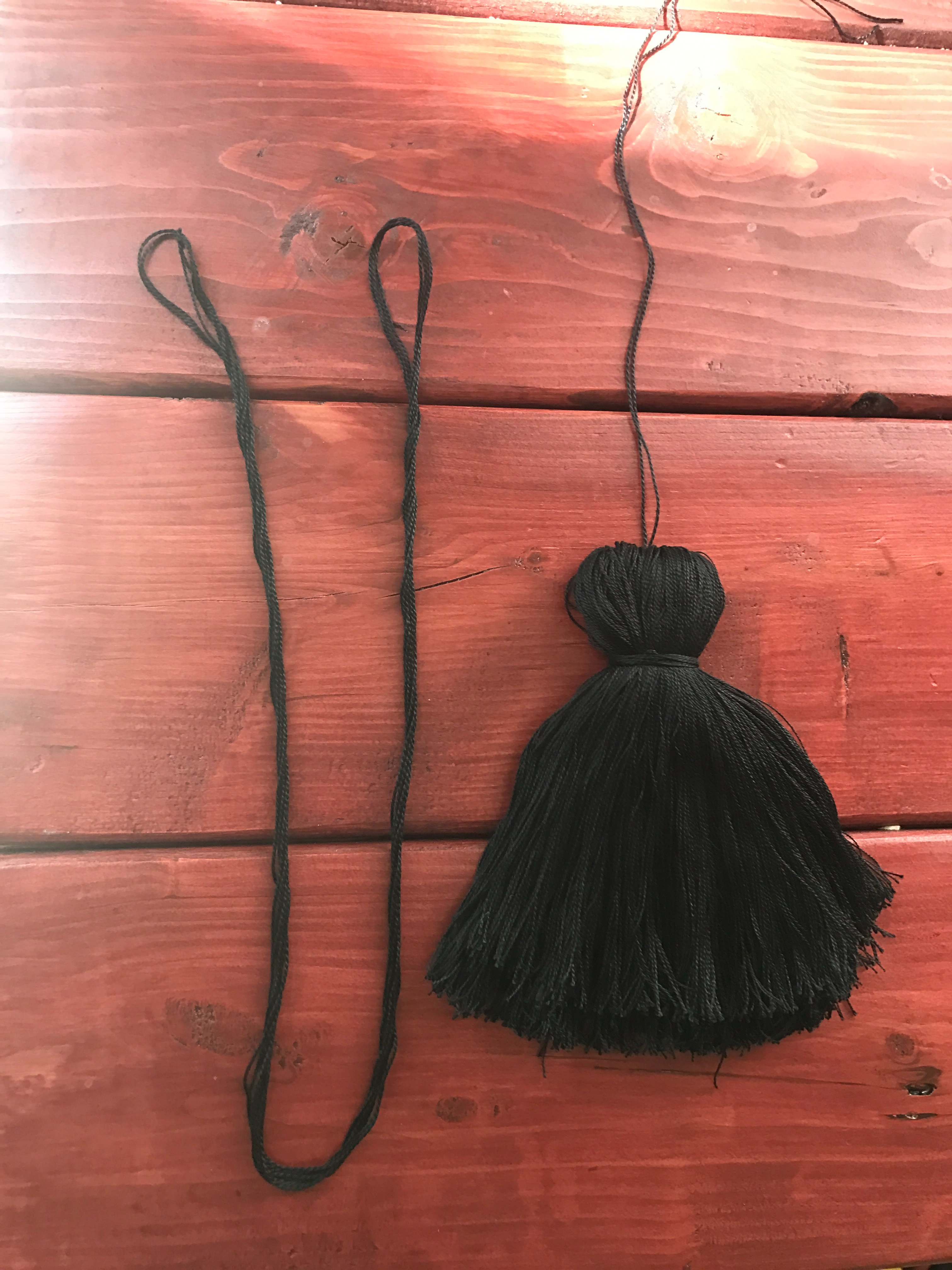 Ok Pom time! Get that fancy pom maker out of the package! Now, there other are ways to make poms without a pom maker, but I honestly feel like this is worth the investment. I’ve made poms for other things, and these were my most even and nicest looking ones. 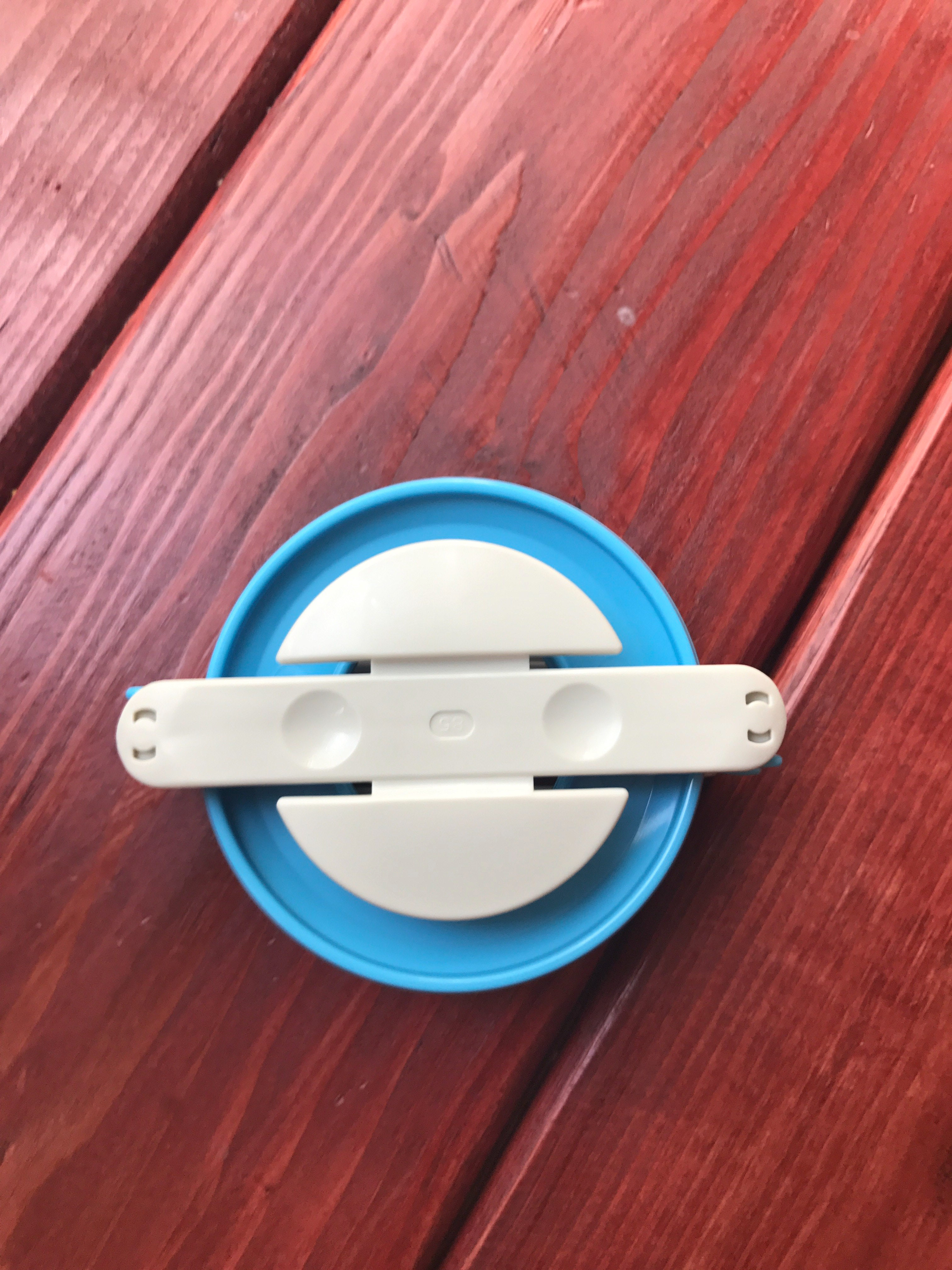 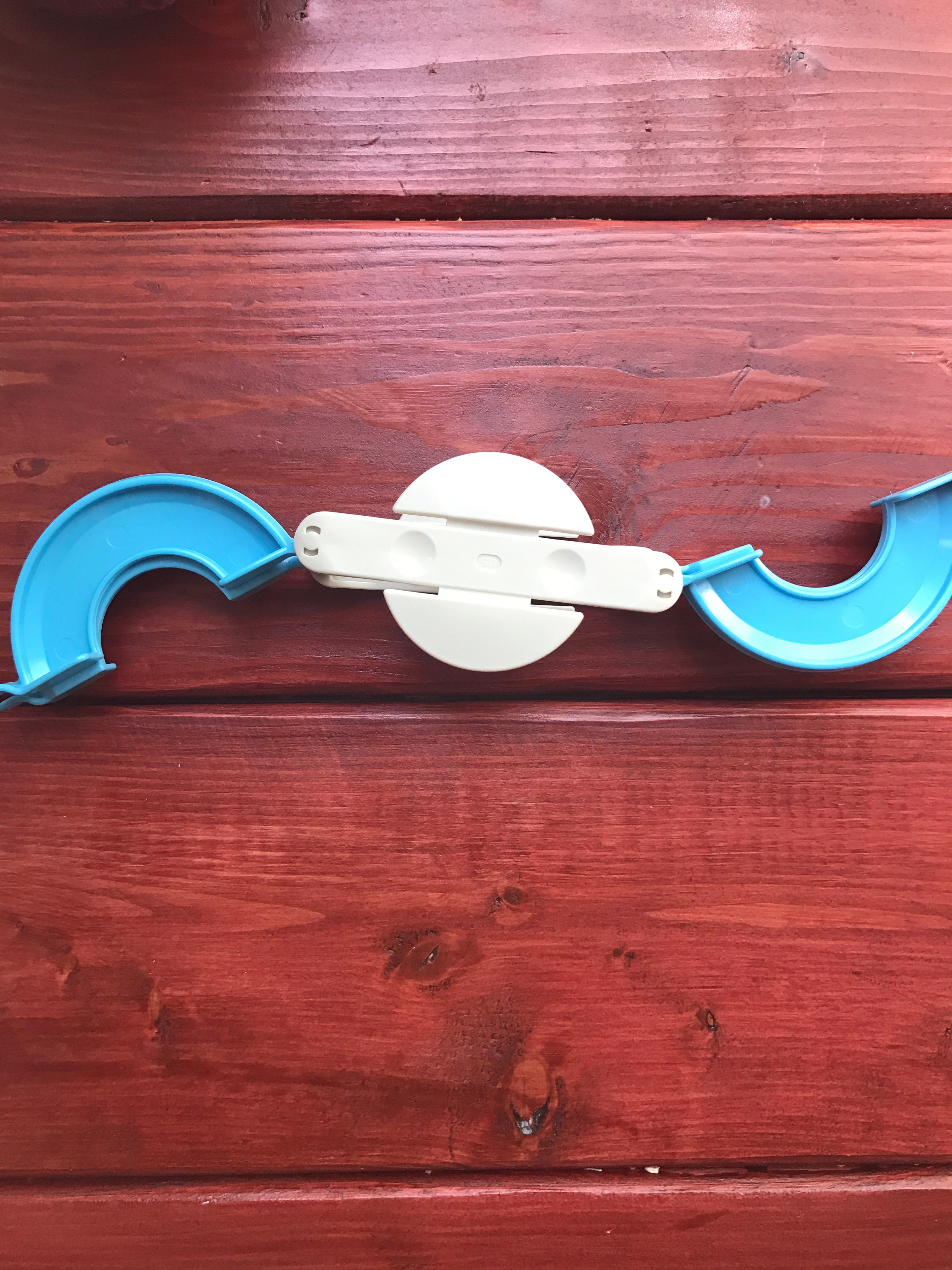 First cut a long piece of embroidery thread or yarn and set it aside. We’re going to use this to tie around the pom after its cut. Now open up the pom maker and wrap your yarn around each side. Again, try to wrap in even layers. 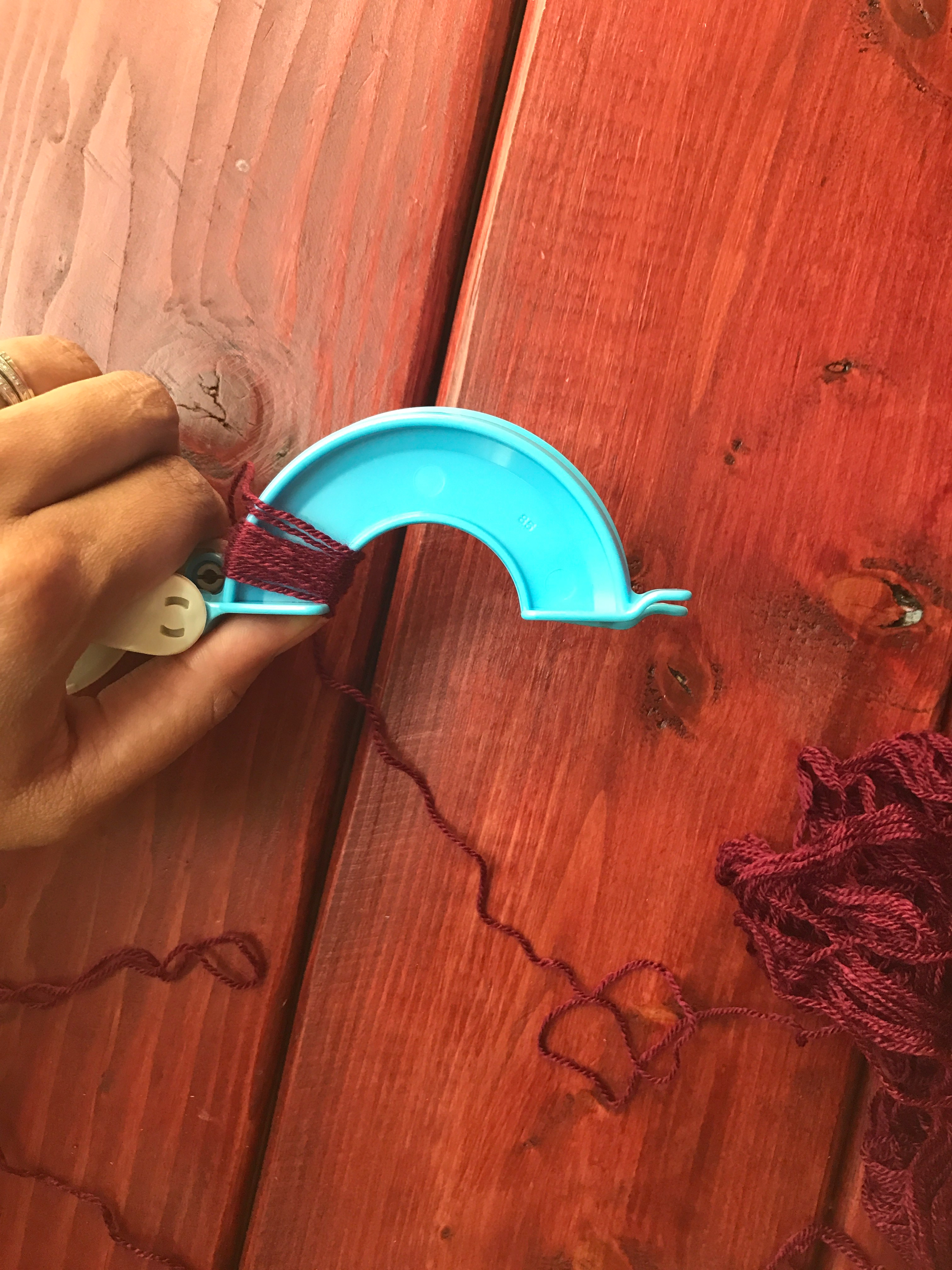 You’re going to want to fill the pom maker as much as you can to get the fluffiest pom. Since we’re using a fine yarn, we want a very full pom so it doesn’t look saggy. 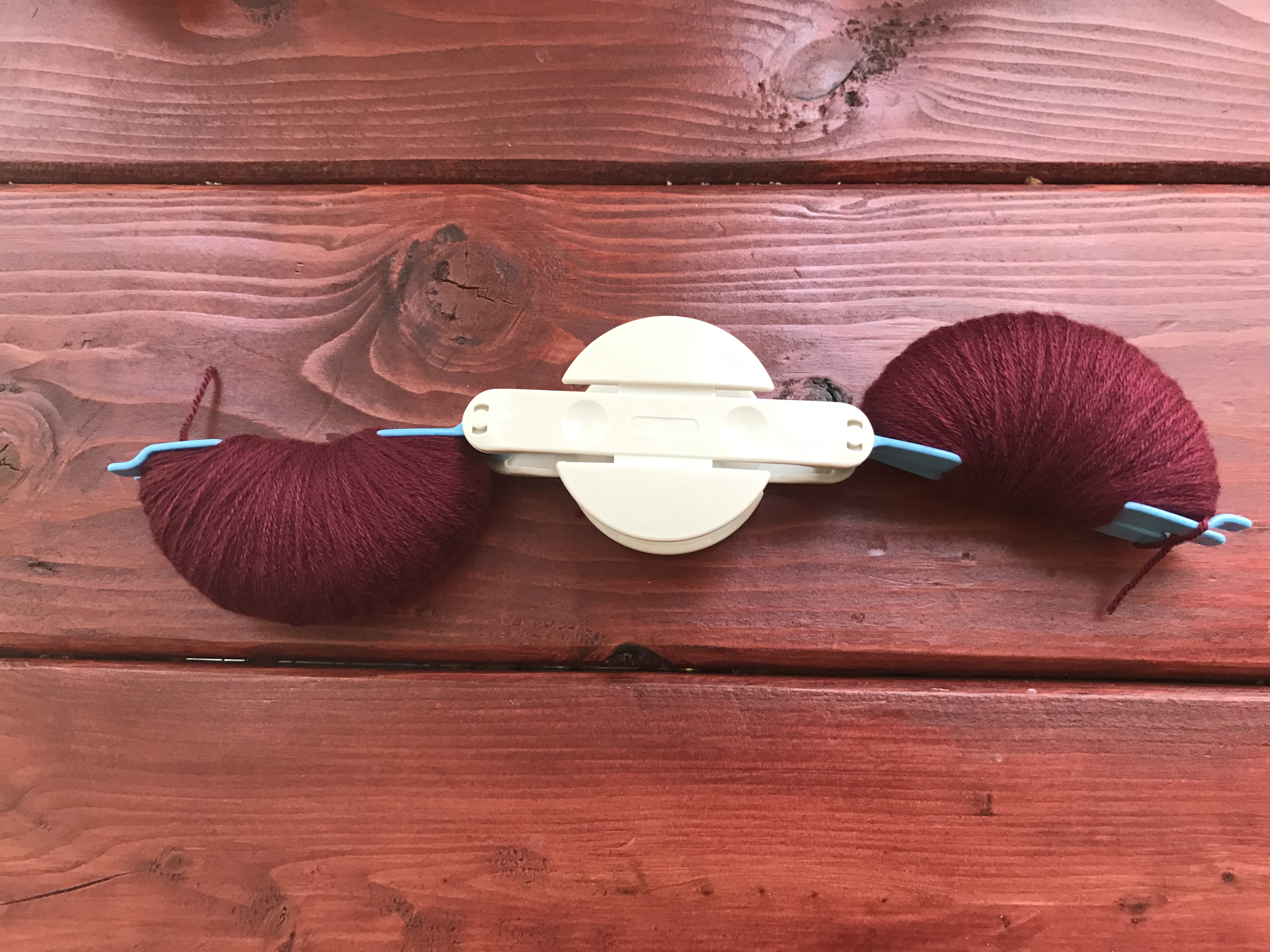 When the yarn looks basically like a full half-circle, you’re done with that side and you can close it up. 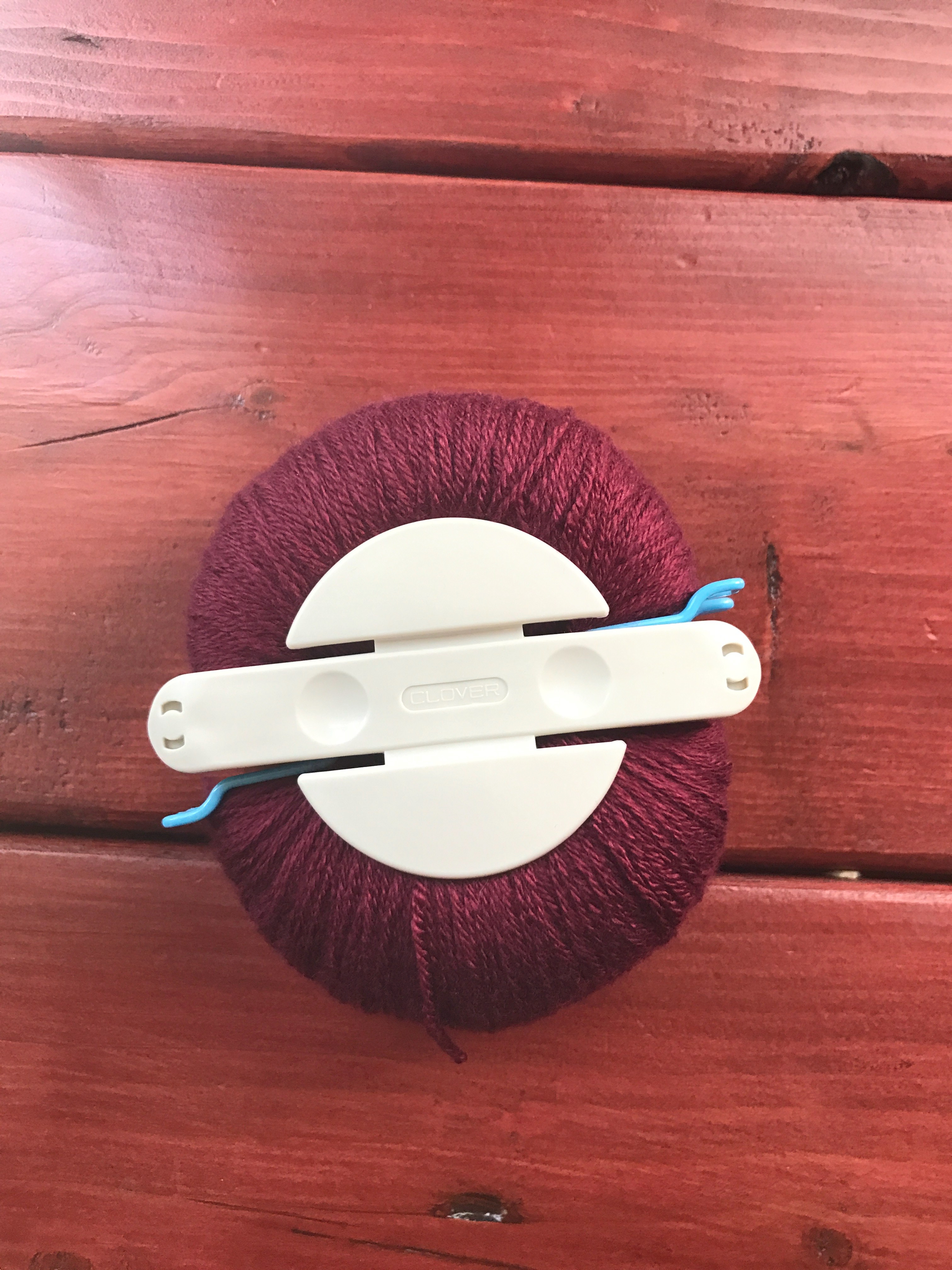 When both sides are full, take those sharp scissors again and cut around the outside edges. 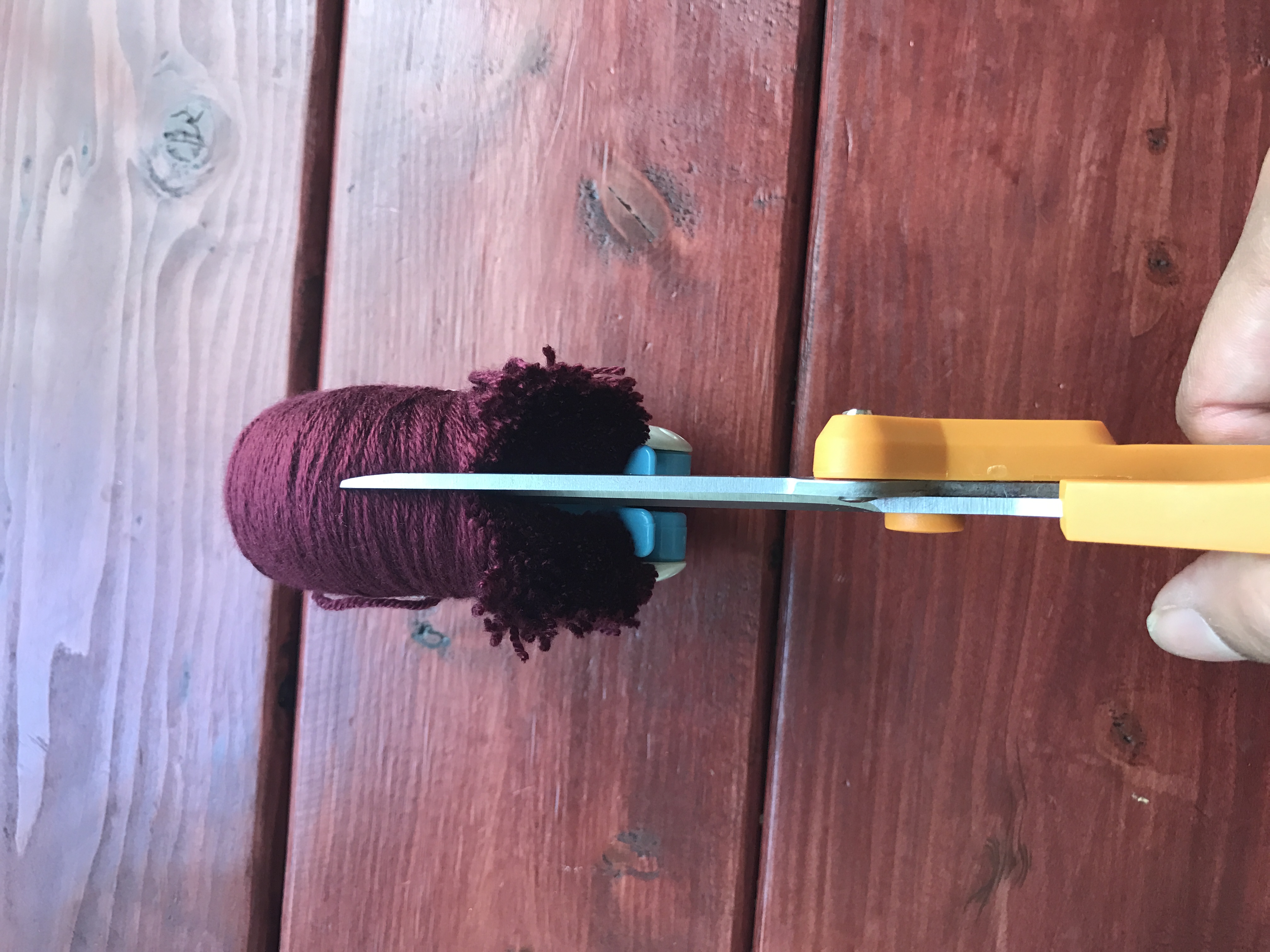 Make sure to hold it closed, because trust me, all that yarn is gonna try to escape before you’re ready. Tie your thread or yarn around the pom, slipping it through the newly exposed cracks. Tie it tight, but don’t take the pom maker off yet!

Ok, now that its secure get your tassel and cord. Slip your extra thread through the top knotted part of the tassel and tie another knot around your pom. This will secure the tassel to the bottom. Now fold your cord threads in half and line them up on the top of the pom directly above the tassel. You want them to be even with the tassel along the bottom, otherwise your pom will be a little crooked. Nobody wants a cock-eyed pom…unless they’re on sale, that is. But I digress. Tie another knot around the pom, securing the cord. 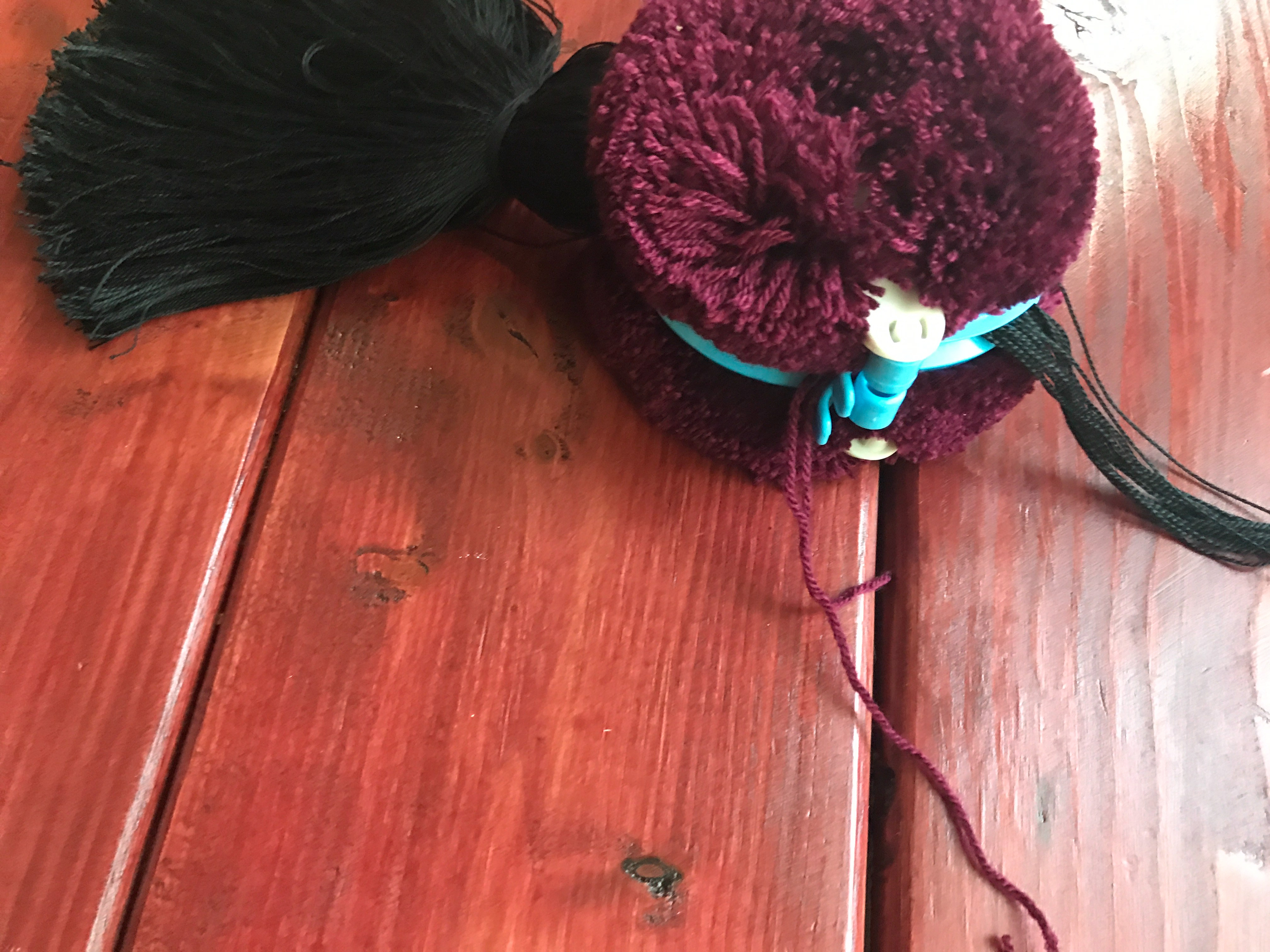 Now that everything is secure, you can carefully remove your pom maker. 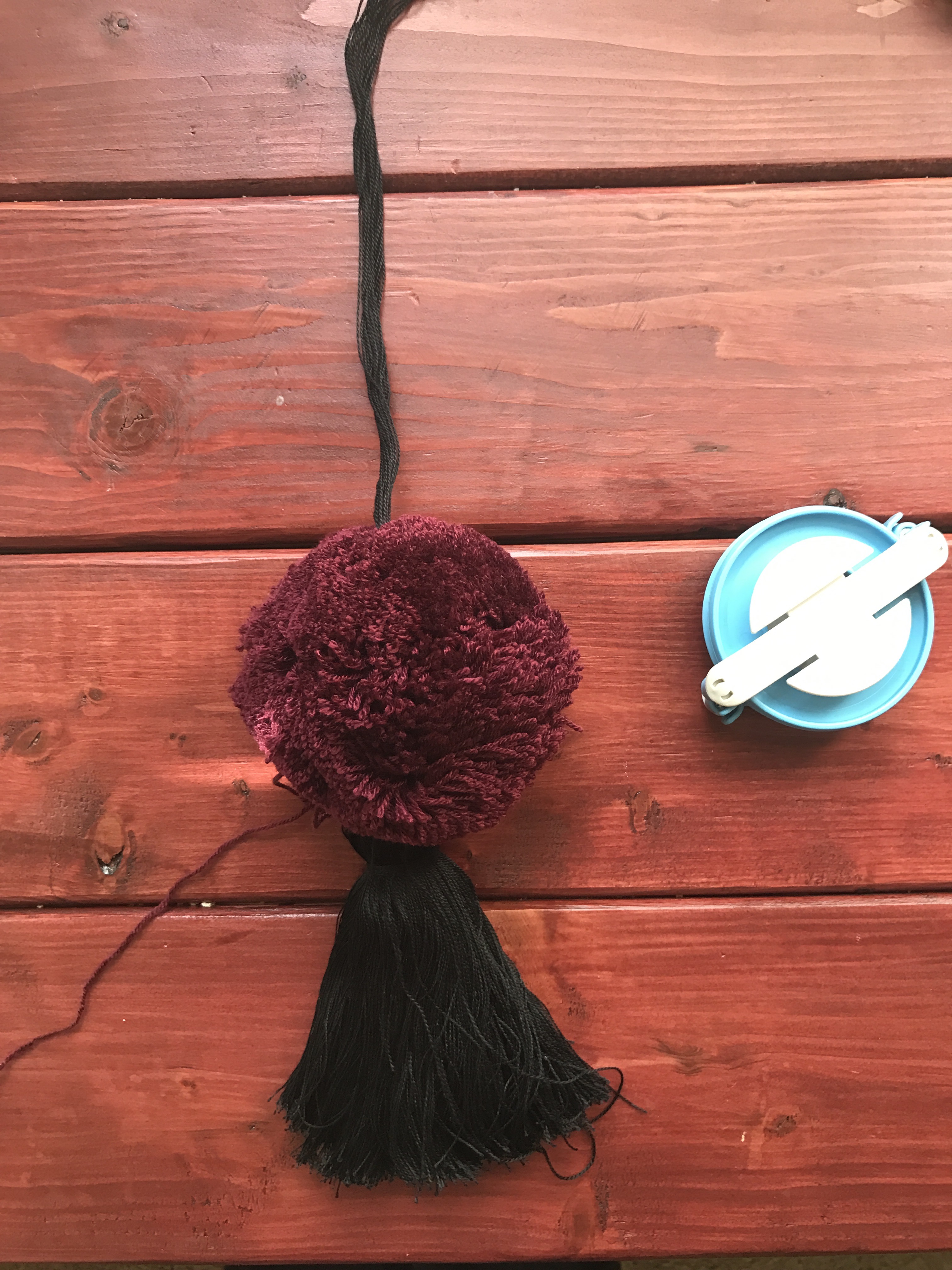 You will have all those loose cord threads, all about 12 inches long now. You can either braid it, or I like to twist it. To make the twist stay, you will actually need to twist the two strands between your fingers before you wrap them around each other. So it’s like double twisted. Then just tie a knot at the top.

Your pom is going to need a haircut at this point. No doubt there’s some weird long spots and you can probably see where the crack was. Just trim a little a a time until it looks the way you want. I like to trim and walk away for a bit to avoid totally shaving my poor pom. Been there, done that. 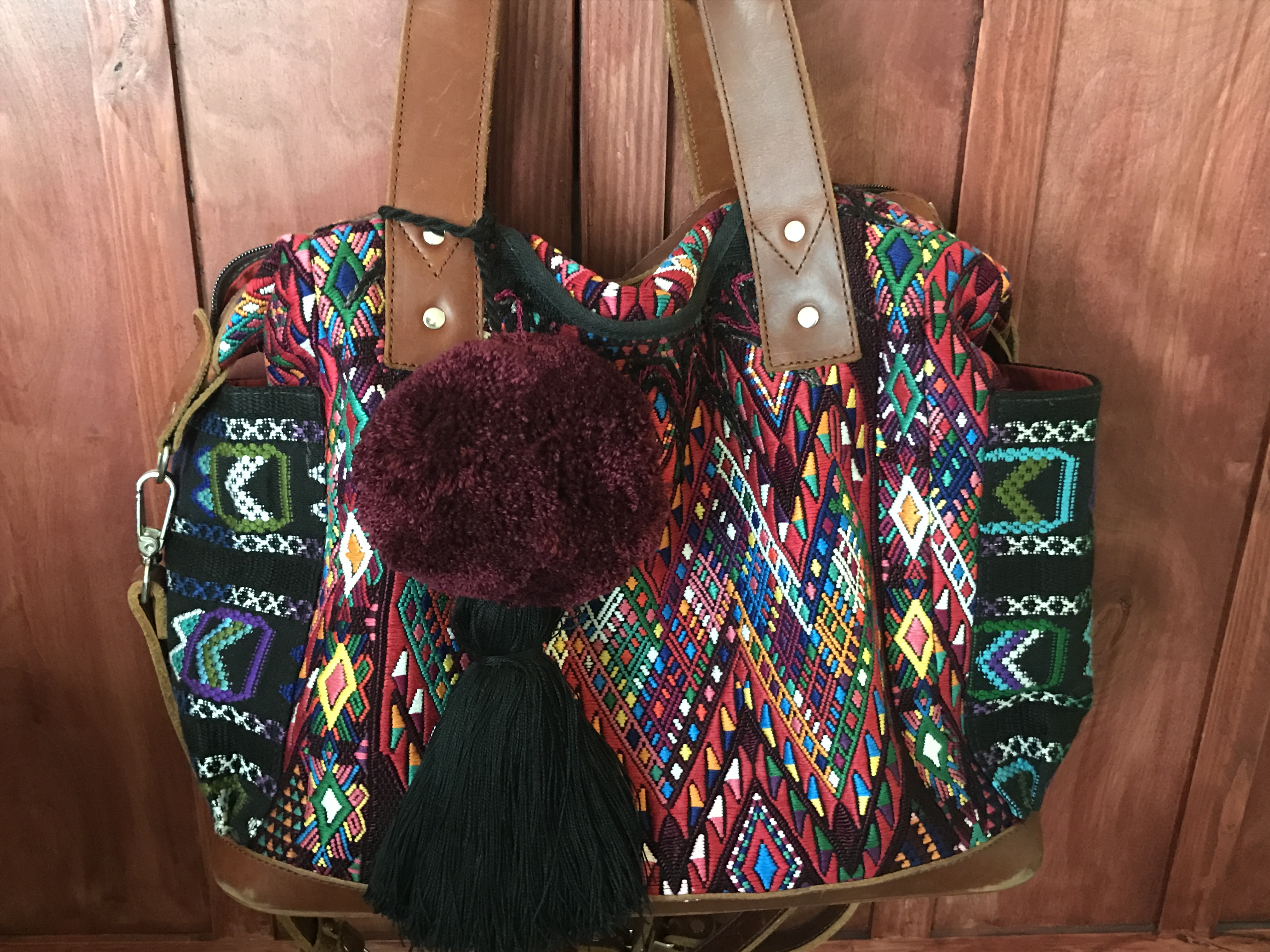 Now let’s try out a double pom! I picked these colors because they matched another one of my bags. I’m slightly ashamed to admit how many bags I actually have, but you have to admit, they’re pretty right? Plus I got them on sale? Any who… 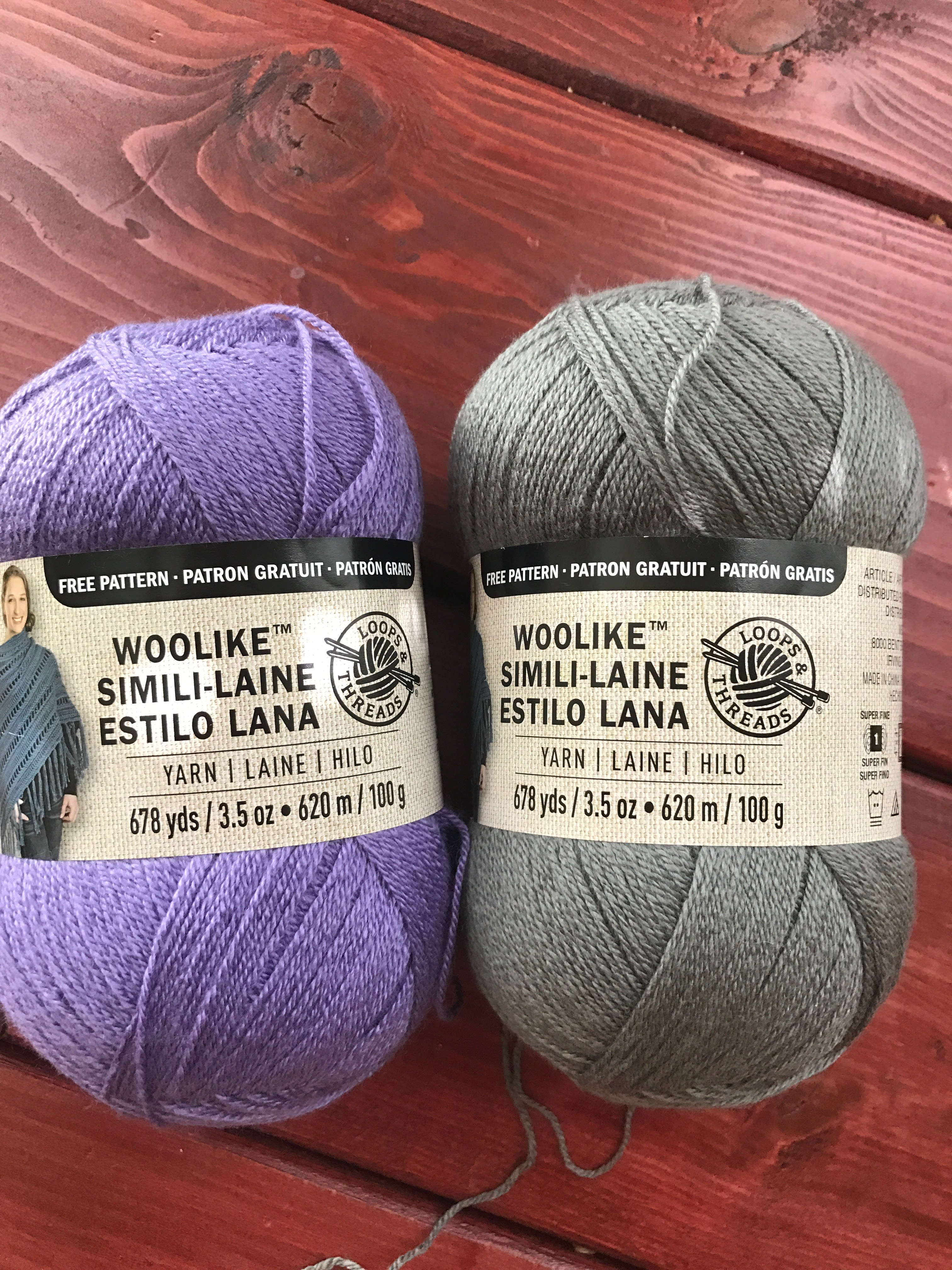 You will have to prep your cord pieces again, but you don’t have to worry about making a tassel this time.

This time I used the smaller of the two pom makers. Let’s be honest, that first pom was a monster! 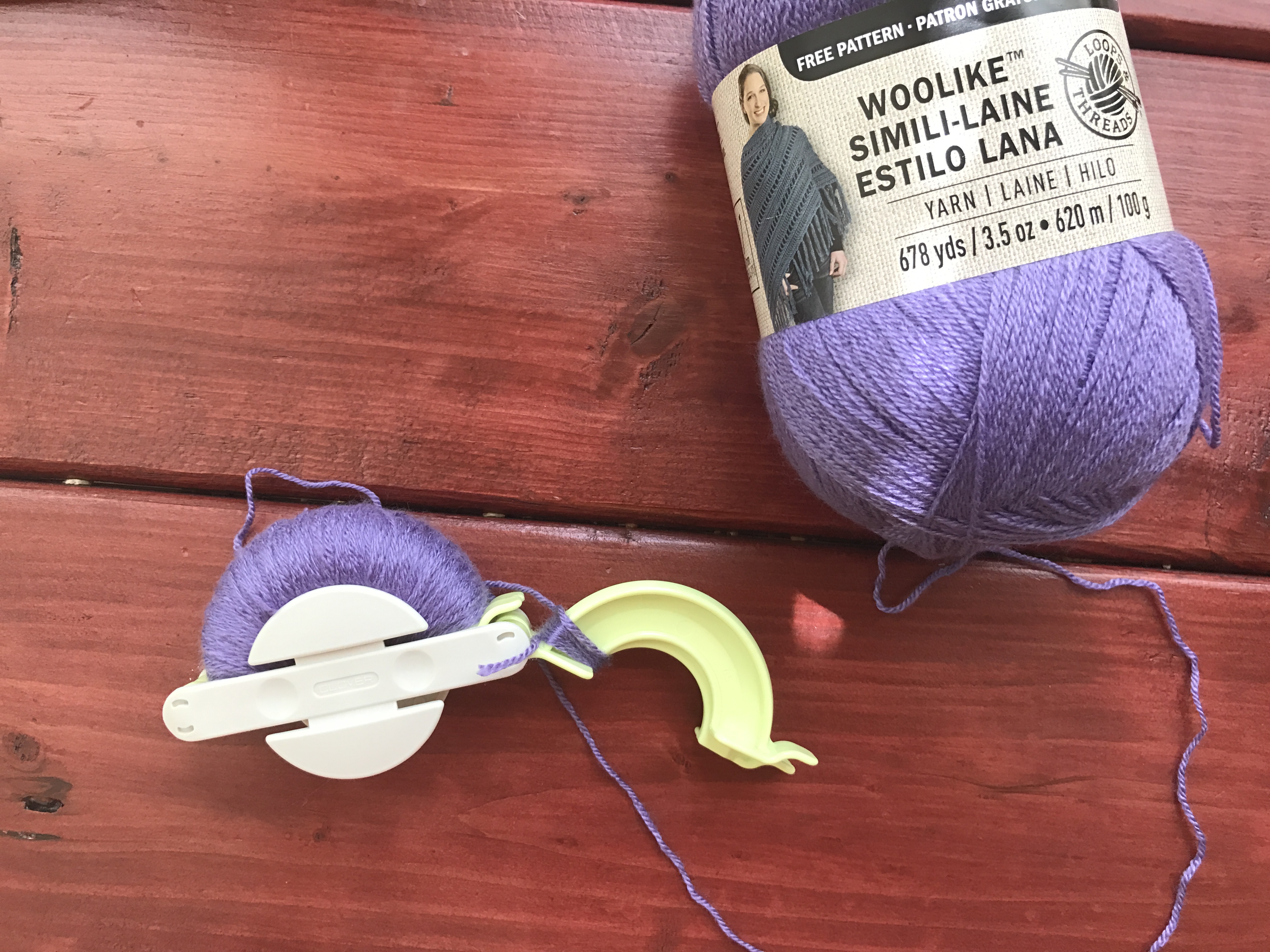 Make the pom the same way you made the first one attaching the cord threads at the top. But instead of tying the tassel to the bottom, simply tie the loose strings at the bottom of the pom after you’ve attached your cord. That way, they’re ready to attach pom #2. 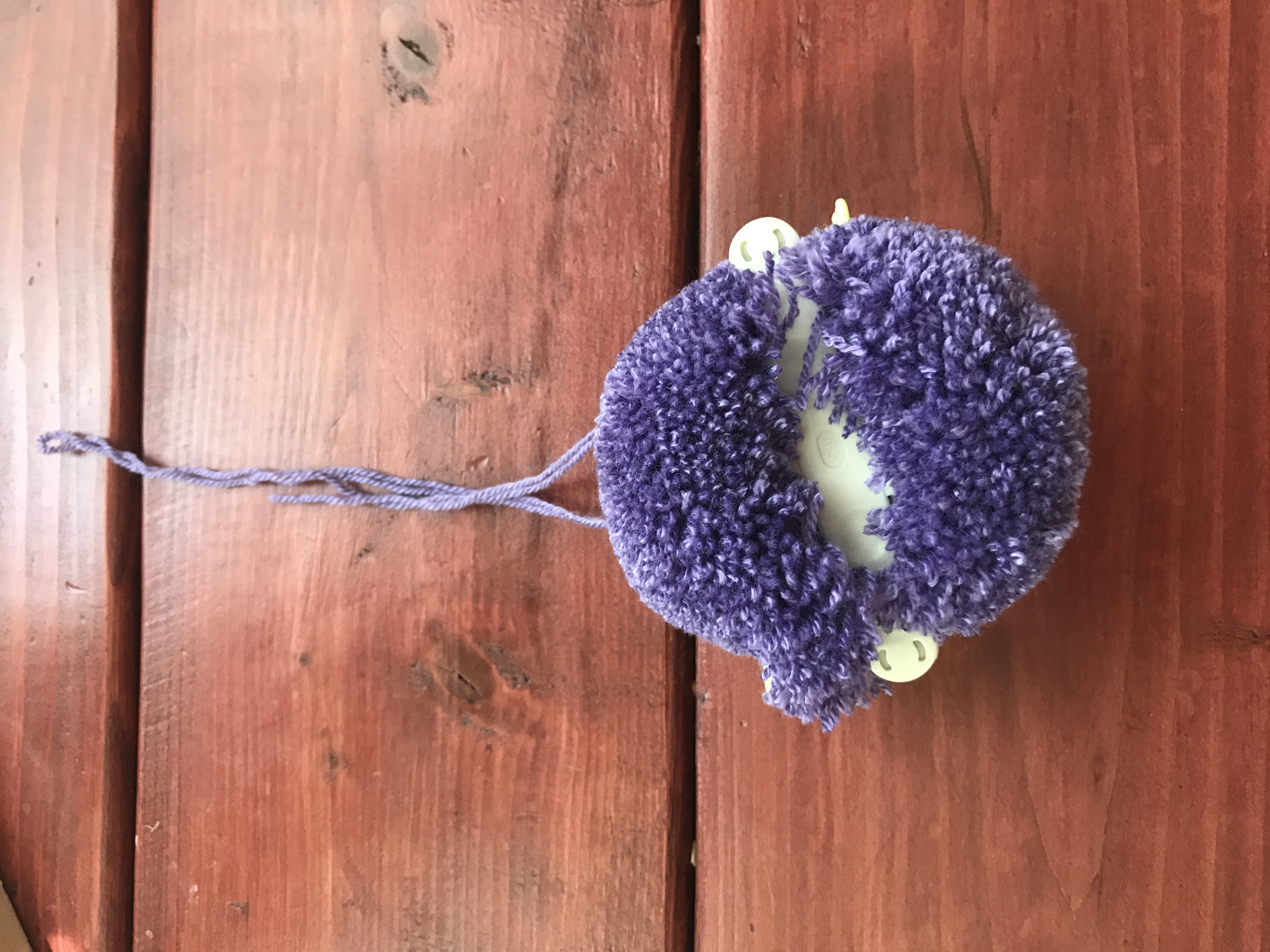 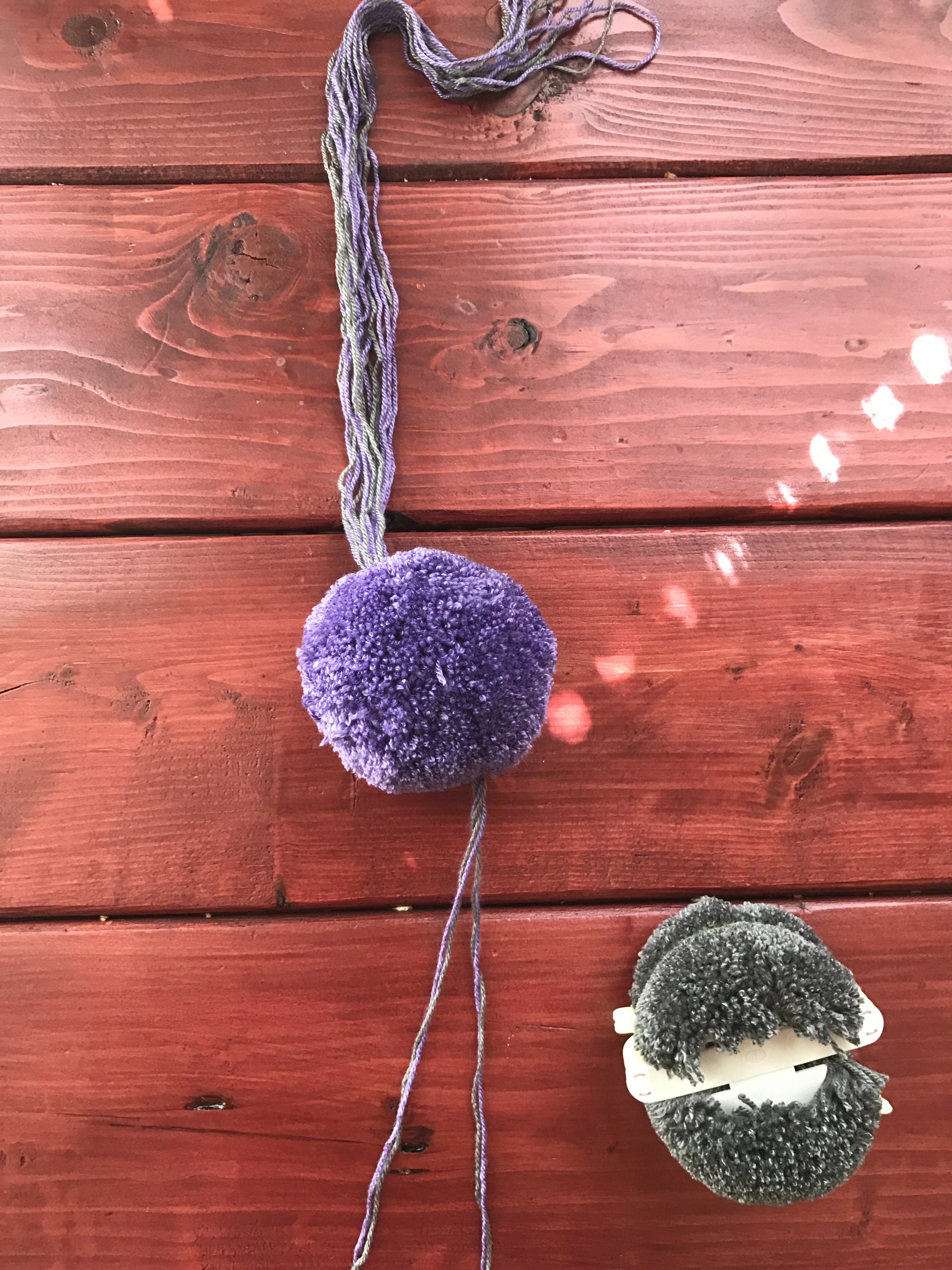 Now you have two poms! 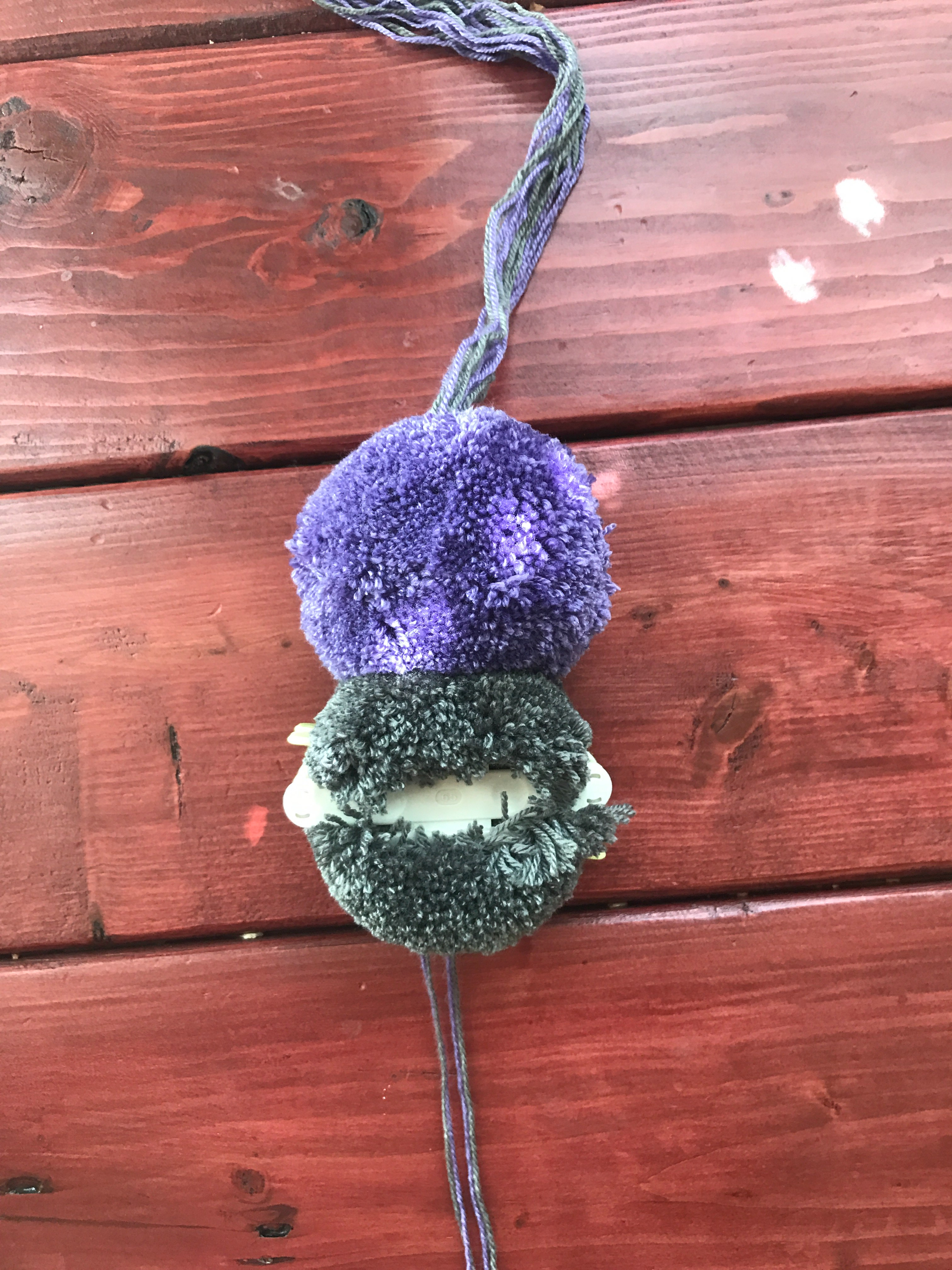 Snip your extra thread, tie up your cord strings, and give those babies a haircut. Congrats thats it! Told you these would get easier. 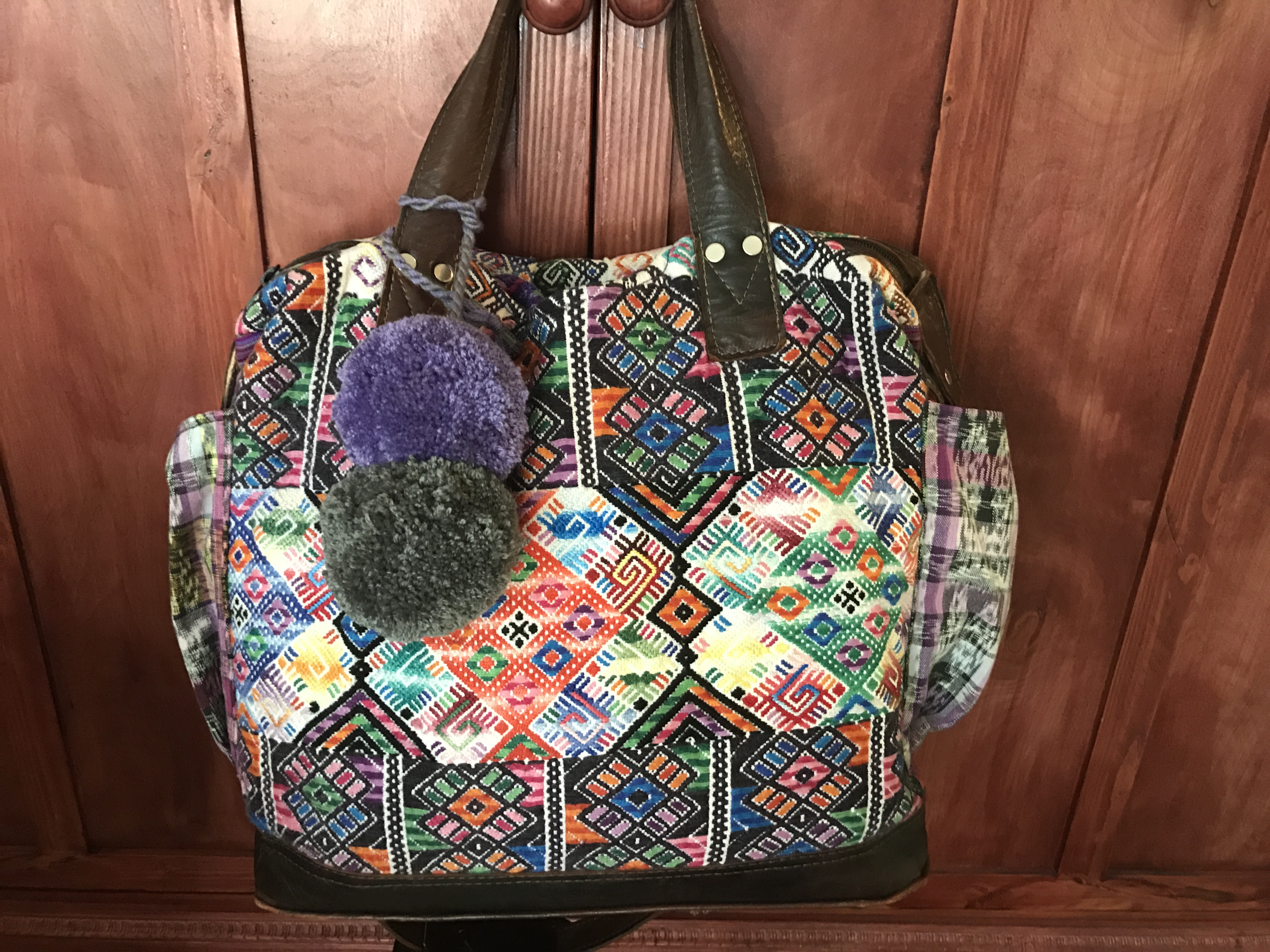 The last one is just a tassel.

I actually used crochet thread for the tassel. I found this cool color-way that matched my bag perfectly. Yes, I have another bag. 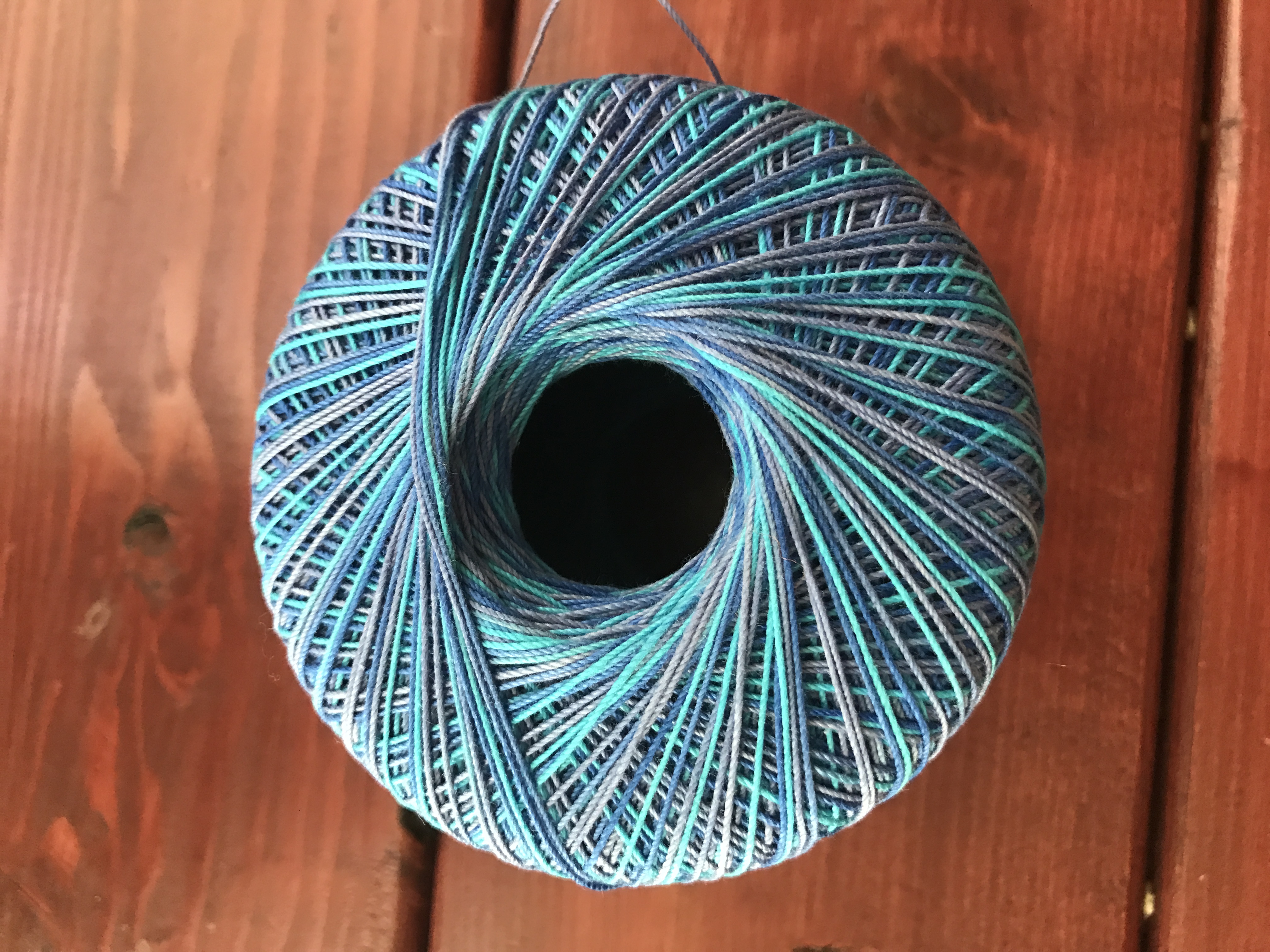 Ok, get that DVD case back out. We’re going with Horton Hears a Who this time, since we already watched The Lorax. Tape your top string across and start wrapping. Tie, snip, and tighten.

Now, we’ll get a little fancy. starting about an inch to inch and a half away from that center knot, attach a piece of thread. 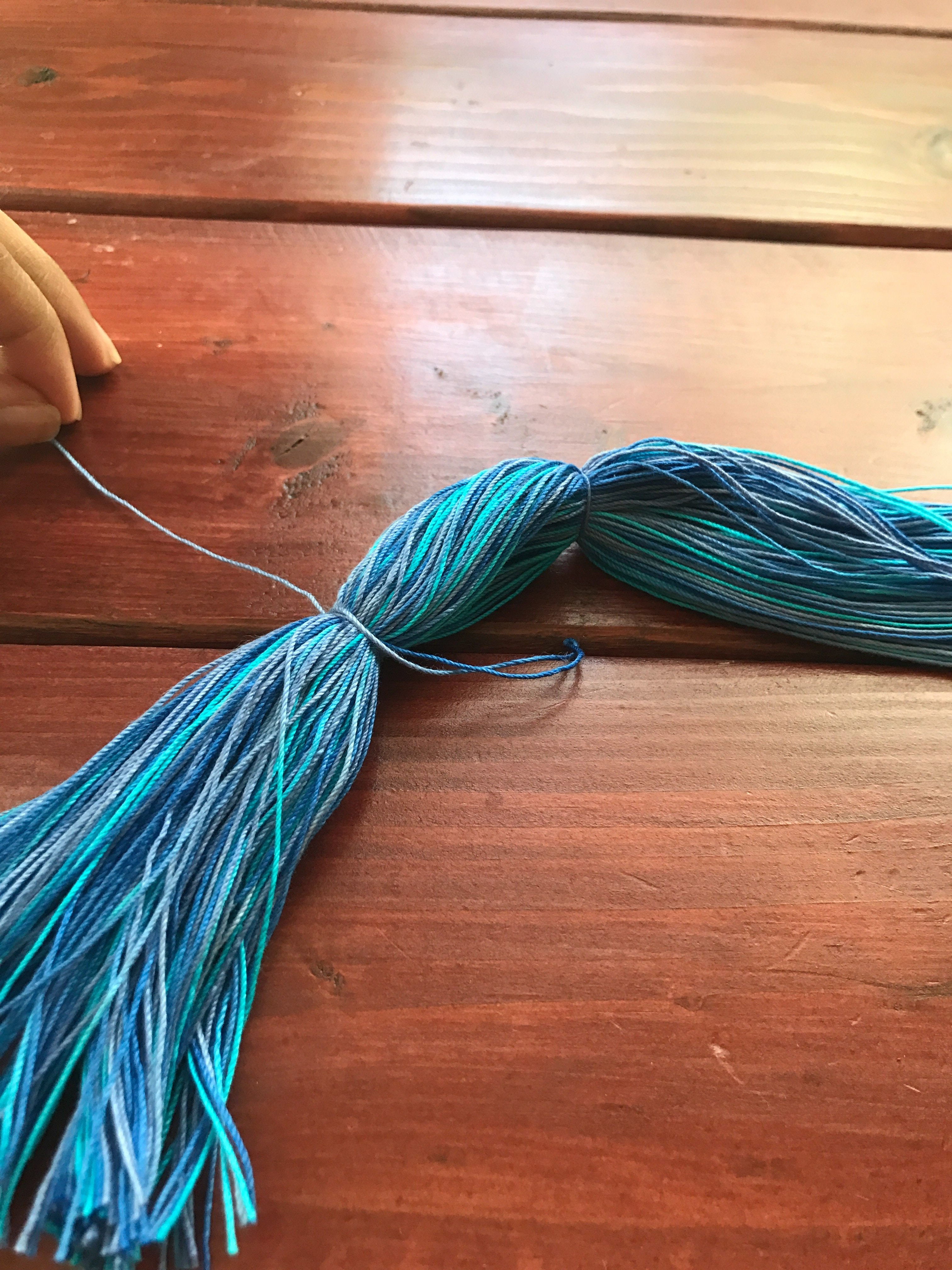 Then start tightly wrapping around the tassel. 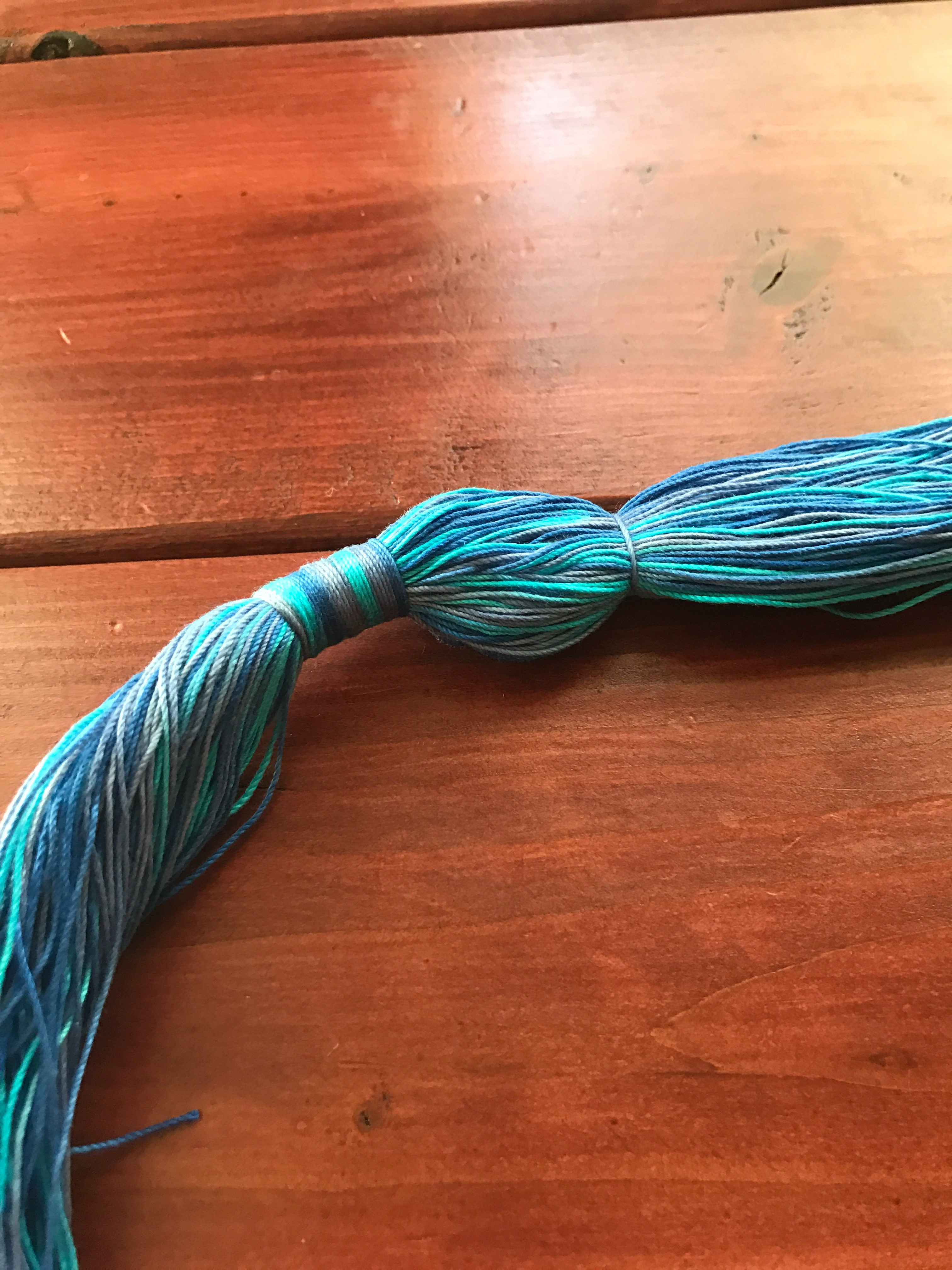 Keep going until you have an equal amount of remaining tassel on each side. Then wrap a few extra times around both pieces to secure them together. With a tapestry needle, weave the end back up through the wrapped pieces. This will secure the end and keep it from unraveling. 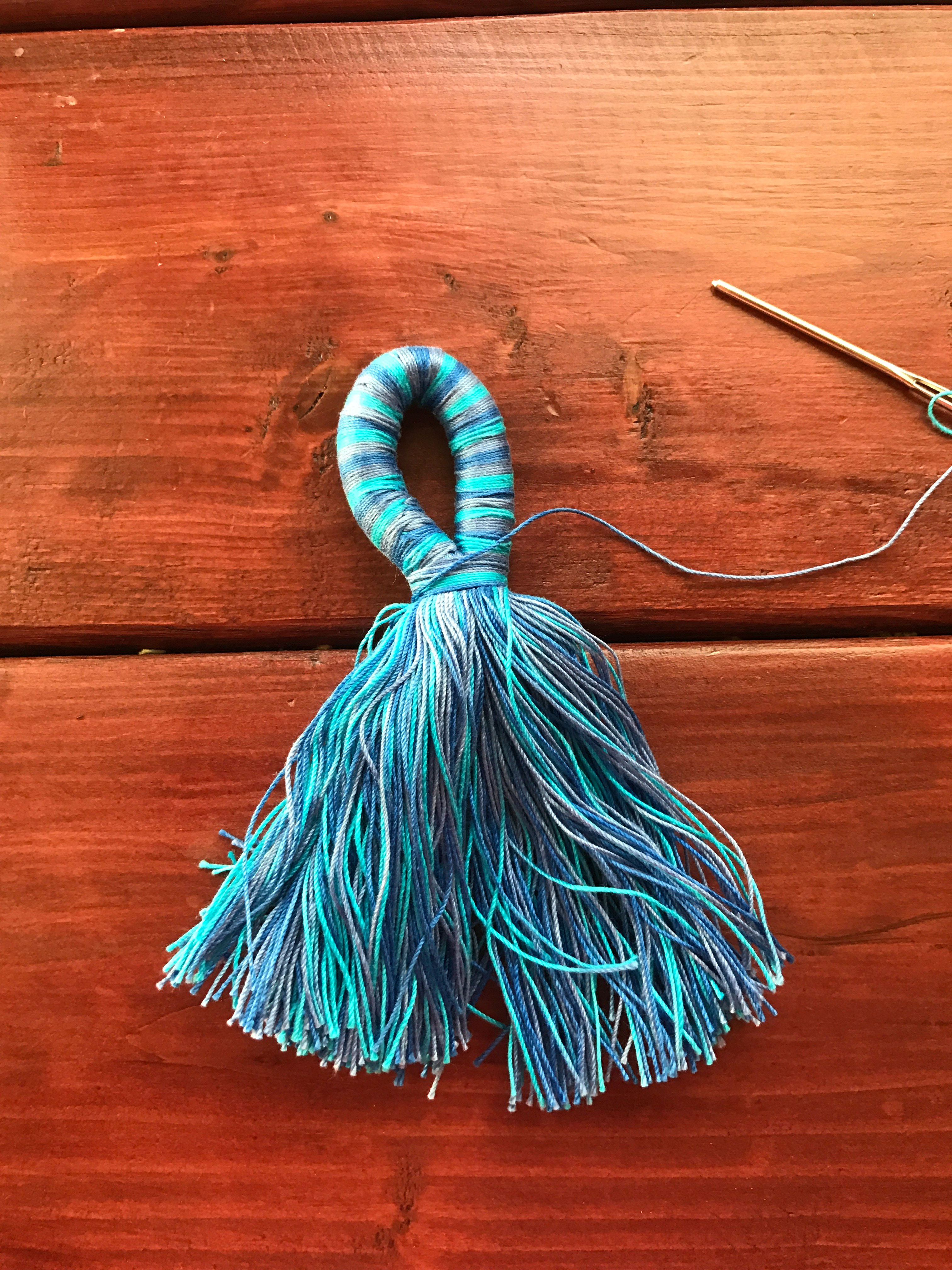 Now attach a cord to the top. And you’re done! 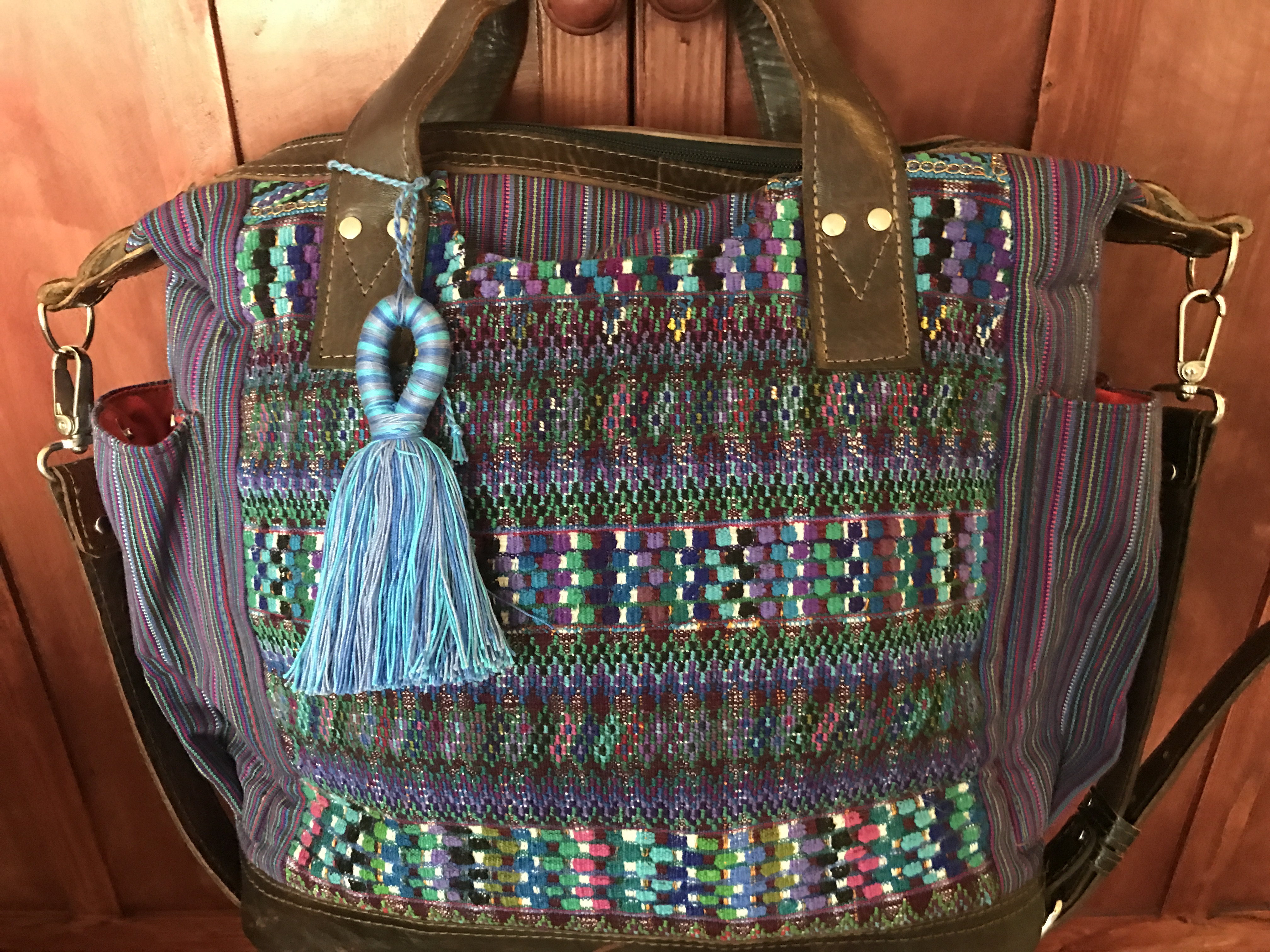 There you have it! Three different purse accessories! The more you make, the neater they’ll look. If you’re like me, and paranoid about things you make, or just life in general, unravelling, you can put some fabric glue down in the center of the pom to help hold it in place. Just be careful how much glue you use, otherwise you’ll end up with a sticky mess that with dry into a stiff mess. Just know that anything handmade will have imperfections, so if your pom is a little wonky or your tassel has a tangle, don’t worry too much. It just adds a little character.

Hope you enjoyed! I’ll hopefully have a few for sale next week for those of you that are not-so-crafty. If you want to custom order something, feel free to send me a message on my contact page. I’ll have part 2 of the Chevron Beach bag series coming up in a few days, so keep an eye out! Give me a follow if you want email notifications of new content. Until then, happy crafting!