So the final big project for my baseball themed nursery was the dresser. My in-laws had graciously given us my husbands old dresser to use in the nursery. However, it was nothing special. They had picked it up at a garage sale 20+ years ago and sanded it down to just wood. Don’t get me wrong, it looked ok. And at some point, I may sand it back to that point again and put a nice dark satin on it. However, I wanted something lighthearted and fun for the nursery, so I decided to paint the dresser. 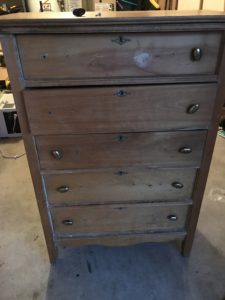 I had my husband sand the sealer off the dresser. I walked around the neighborhood with my boys because my two-year-old is a bit sound sensitive and wasn’t too happy about the power tools running. You can’t tell, but he has his ear muffs from the monster truck rally on. 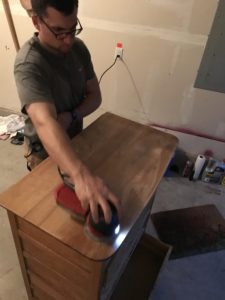 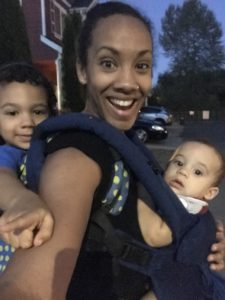 I then put a quick coat of dark stain on it. It was kind of amazing at that point and I was tempted to just leave it alone. But I figured, I should just finish it and sand it again later if I didn’t like it. 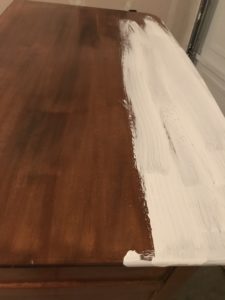 After the stain, I put two coats of white paint on it. We had a glossy white in the garage, but I think a satin or an eggshell in an ivory or off-white would have been perfect. I found the white to be very thin and translucent, so it definitely needed more than one coat. 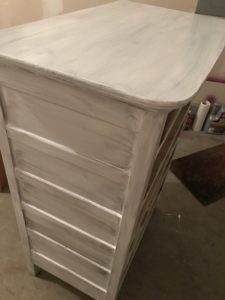 So even though it was still a bit streaky looking, I left it at two coats of paint. I wanted it to have a bit of a vintage, whitewashed look.

Then I got a sample of red paint from Home Depot and freehand painted the baseball stripes on. I don’t have a fancy trick for getting the stripes perfect except it does help to paint one side first of the baseball shape first, and then mirror the placement on the other side. But even that isn’t an exact science. 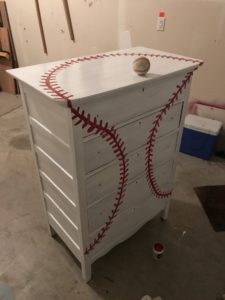 I don’t recommend using a sponge brush for the stitching effect. I started with that to help maintain even lines. It worked great across the top, where the surface was flat. But once I got to the front of the dresser, it was depositing too much paint and gravity was causing major drips. In fact, I had my sister help me while I was nursing the little guy and she got a little heavy-handed with the sponge brush and we had some serious drips. I cleaned them up while they were still wet, and eventually I’ll go back and touch them up with a small brush. But after having baby clothes all over the place, I was just ready to get the dresser back in the nursery. 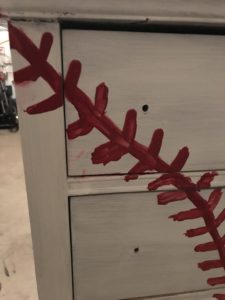 Last thing I did was to take some fine grit sandpaper and go over the edges and corners to emphasize the antique/vintage sort of look I was going for. I also opted to keep the original drawer pulls. I think that they give a nice balance because cheesy kids dresser and vintage baseball dresser. 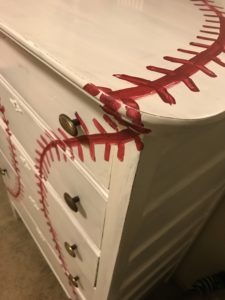 Overall, I think it’s pretty adorable. My husband would probably be horrified with my sloppy paint-work, but he’s crazy meticulous with that kind of thing…and terribly slow. But given that it was a free dresser from a garage sale, and I used paint that we already had in the garage, I think it turned out pretty awesome. It’s still missing one of the screws for the last drawer pull, but that’ll be a quick fix with a trip to the hardware store. 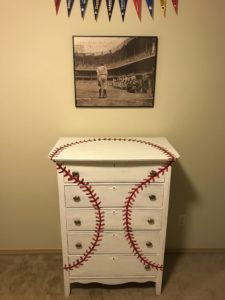 So, my last post of this series will give you a final look at the nursery, including some accent pieces that I think pull the room together. Until then, Happy Crafting!