So I’ve managed to clear enough stuff off my desk to finally sit down and type. I figured I’d put the second installment of the baseball themed nursery up. As you know, I’d doing this on a tiny budget. I commandeered the blackout curtains from my older sons bedroom and put them in the nursery. I put some spare curtains in his room until I’m ready to redecorate his space, but I wanted the navy blue ones in the nursery since they’re the darkest. Unfortunately, plain navy curtains are super boring. 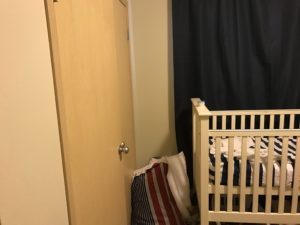 So I had the idea to spice them up with a banner made from baseball pennants. I needed to add a nice pop of color without breaking the bank on new curtains.

I found this set of mini MLB pennants on eBay for around $12. 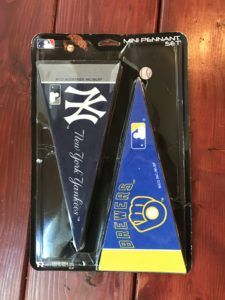 I also bought a roll of ribbon at Walmart for $1.97. Got my glue gun and I was ready to roll. 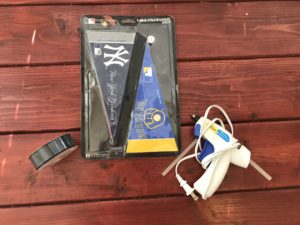 First, I wanted to lay them out in a way that looked nice. You know, so that the colors were appealing to the eye, However, I was later corrected by my husband who organized them by league and in alphabetical order by city. 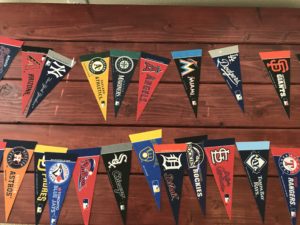 I then had to decide what kind of spacing I wanted. I opted to go with a slight overlap. However, I wanted to note that not leaving a gap of ribbon between the pennants made the banner really stiff. It still worked for my purposes, but definitely something to keep in mind if you’re making your own. 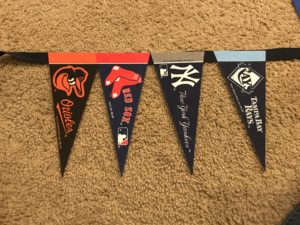 Then I simply hot glued the top of the pennant to the ribbon leaving about 12″ extra on each end to tie them to the curtain rod.

I only managed to get three leagues on the curtain. I didn’t want it to hang too low, because them the baby will be trying to pull it down. 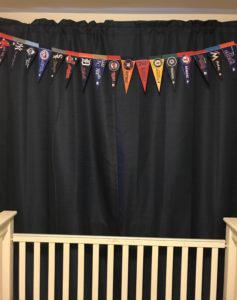 So I took the extra two leagues and hung them on the wall above the Babe.

Overall, Im really happy with how they turned out, and I managed to do it for under $15. It’s a great way to fill black space in a bedroom. I also think it would like pretty awesome going all the way around the top of a room.

Hope you enjoy! I’m working on my last piece today and hopefully will have a finished nursery to show you all by the end of the week. Until then, happy crafting!