So I’ve decided to start a new mini-series. With my little guy creeping up on 7 months old now, I decided its finally time to set up the nursery. I decided to go with a baseball theme. Well, actually, it was somewhat decided for me. My husband has these custom framed posters from his teenage years that my mother-in-law gave to me after we got married. I’m not exactly sure what inspired my teenaged husband to purchase these (his mom told me that he spent his own money on them), but they’re important to him so we’ve held onto them. 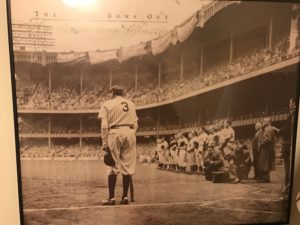 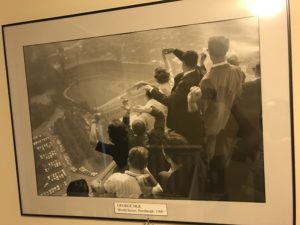 They’re not exactly my ideal decorating pieces for a baby nursery, but our place isn’t very big, we can’t exactly leave glass frames on the floor with my boys, and I sure as heck don’t want them in my bedroom. So, baseball theme nursery it is.

I’m doing the decor for the nursery on the cheap. Ideally, we’ll put the boys in bunk beds at some point, so I don’t want to get too crazy decorating two separate rooms. To stay with my small budget, I decided to make and/or upcycle most of my decoration pieces.

My first had to have item was a baseball hat rack. I found the tutorial at Hometalk. Simple and concise. And we had an abundance of baseballs, also from my husbands childhood (his parents are “savers”). We also happened to have tools, wood stain, and screws in the garage. So my only expense was to purchase a 1x6x6 board at Home Depot for around $5 and the wall mounts which I think were about $3.

I politely asked my husband if he would do a little project for me and he politely declined, so I had to do this one on my own. Luckily it was fairly simple. The hardest part was dealing with the disaster that is the inside of our garage.

I started by cutting my board in half using a miter saw. Each piece was 3′ long. I wanted it to be able to hold 6 baseball hooks, so it’s a bit longer that than rack in the tutorial I used. 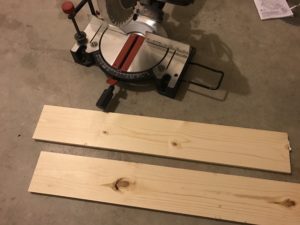 I then sanded it with an electric sander and stained it. I wanted to go dark brown, but again, the garage is a disaster and I couldn’t find the dark brown stain until after I had basically finished theproject (insert eyeroll). 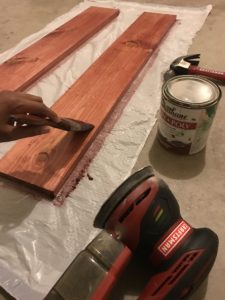 I marked equal spacing for 6 baseballs and drilled pilot holes in the board and the baseballs. 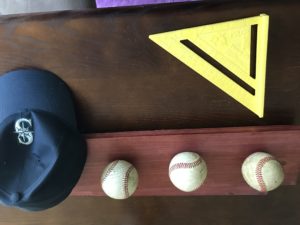 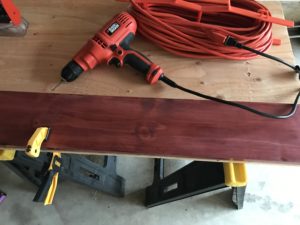 Then put the screws through the board and screwed the baseballs on (not too tight). 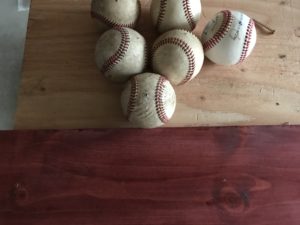 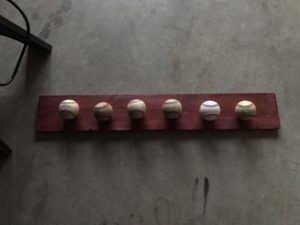 I finished it by asking my husband to screw the top shelf on. I had intended to do this all myself, but didn’t have a clamp wide enough to hold it in place. My husband has bigger hands and stronger grip strength so he didn’t need to the clamps. He was also kind enough to add the wall mounting hardware for me. Granted, I did have to take it off and reattach it because he put it in the wrong place. But it’s the thought that counts right?

Anyway, we put the mounts in the wall and hung the shelf. 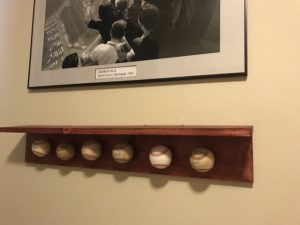 Added some hats and some of my husbands old baseball memorabilia (you’ll never guess where I got that…haha. Yup…his parents). I found this big E for Elijah at Hobby Lobby on clearance for $5. I intended to put it on the wall, but I think it looks great on the shelf for now. 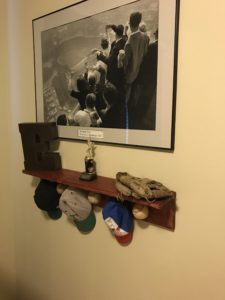 And that’s, that. A cool baseball piece of decor for around $8, plus random garage materials.

I’ll have a couple more baseball decor DIY’s and of course, the finished nursery in upcoming posts for this series. So keep an eye out. Until then.